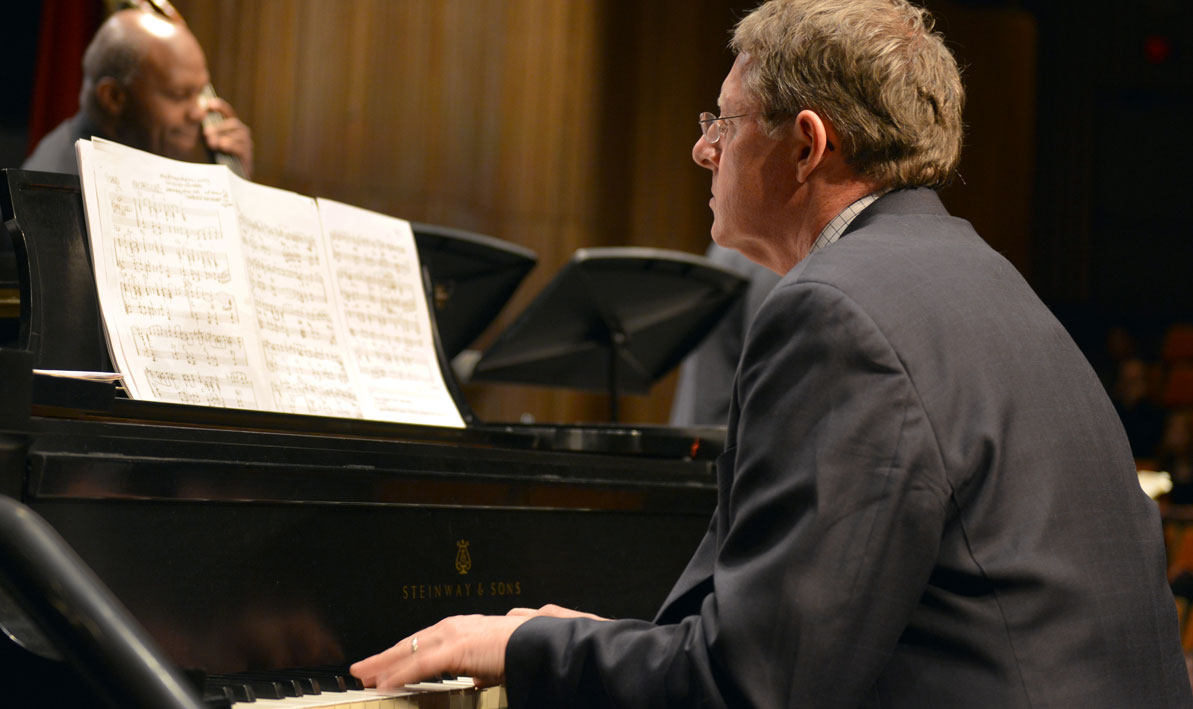 The 21st annual HCC Jazz Festival opens Friday, March 9, with a concert featuring renowned musician and composer Jeff Holmes as the festival's guest artist, playing drums, piano and trumpet with the Amherst Jazz Orchestra under the direction of David Sporny.

Special guest vocalist Dawning Holmes will also join them on stage for the Friday night concert.

The two-day festival of musical workshops and performances begins at 8 p.m. in the Leslie Phillips Theater in the HCC Fine & Performing Arts building. Tickets are $15 (general public), $10 (senior and non-HCC students) and free for members of the HCC community (students, staff and faculty) with a valid ID.

The festival continues on Saturday, March 10, from 9 a.m. to 5 p.m., in the Leslie Phillips Theater with big band and jazz combo performances by high school and HCC jazz students. Jazz clinics, workshops and jam sessions will be held throughout the day in the HCC Recital Hall (FPA building, Room 137).

Jeff Holmes will conduct two music clinics, one at 11 a.m. and another at 1 p.m.   A concluding concert will be held in the theater Saturday from 4 to 5 p.m. This will feature Jeff Holmes  performing with a select combo of students representing each of the participating high schools, HCC students and festival faculty.

Also on Saturday, Gerry's Music in South Hadley will have a display booth showcasing instruments, music and accessories.

Jeff Holmes is a composer, arranger, performer, and a professor of music and director of Jazz & African American Music Studies at the University of Massachusetts Amherst. He holds bachelors and masters degrees from the Eastman School of Music, and is a multiple recipient of jazz composition grants from the National Endowment for the Arts. He has written music for John Abercrombie, The Big Apple Circus, Ernie Watts, Max Roach, Yusef Lateef, Doc Severinsen, the Tommy Dorsey Orchestra, as well as numerous works for military, college, high school/junior high school jazz, concert and marching ensembles.   Featured on the Jazz at Kennedy Center Series with the Billy Taylor Trio, Holmes subs regularly with the Paul Winter Consort, is a member of the 11-piece classical ensemble Solid Brass, is lead trumpeter for the New England Jazz Ensemble, leader of the Jeff Holmes Big Band; and drummer with the Amherst Jazz Orchestra.

Holmes also performed as guest artist at the 2014 HCC Jazz Festival with the Jeff Holmes Quartet.

Dawning Holmes has sung in jazz clubs from New York City to London and Germany. She is the featured vocalist with the Jeff Holmes Big Band and has guested with Paul Winter, the UMass Studio Orchestra/Jazz Ensemble I, the Jeff Holmes Quartet at the Springfield Jazz and Roots Festival, and more recently opened for comedian Bob Newhart. She is currently working on a CD project of her original music and leading her own quartet

PHOTO: Jeff Holmes plays piano at the 2014 HCC Jazz Festival, when he and his Jeff Holmes Quartet were the featured artists.