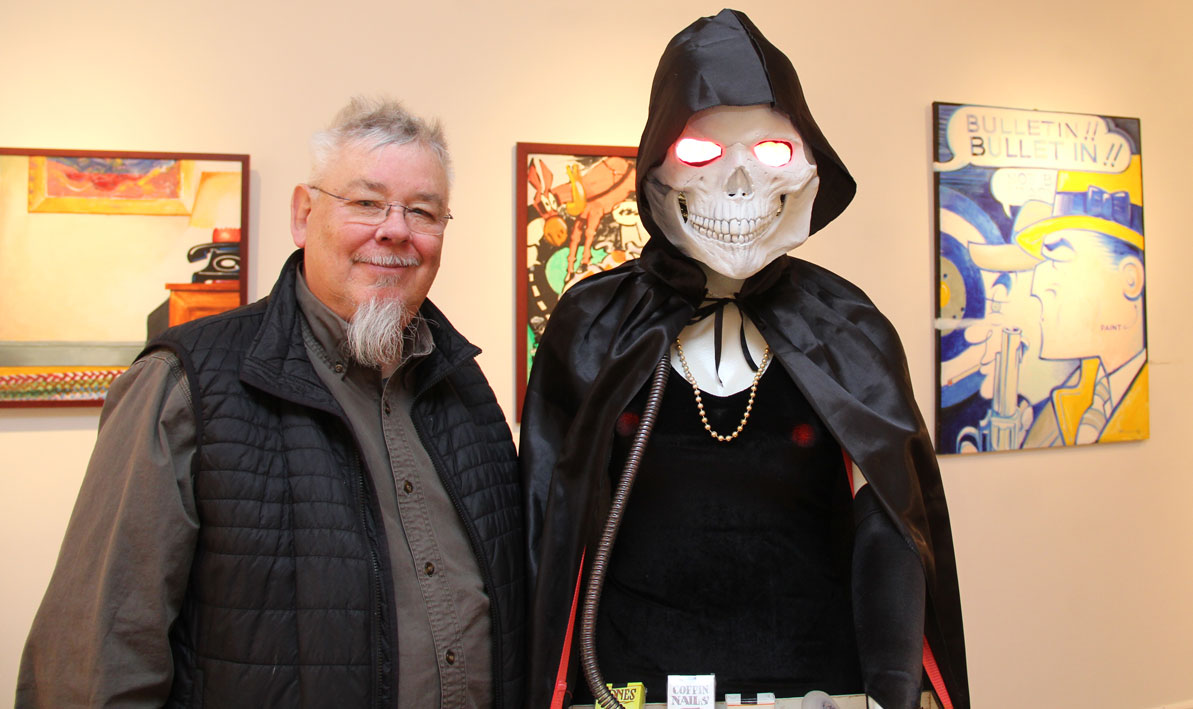 Disney lawyers were not amused.

Despite support from free speech advocates like Village Voice critic Nat Hentoff, a judge ultimately found the Air Pirates in violation of federal copyright law. To this day, despite a five-decade career as a pop artist and illustrator, Hallgren remains on permanent injunction, banned from using Disney characters in unauthorized ways. All others, though, he consider fair game, and much of his art features ironic twists on familiar cartoon creations, from Bugs Bunny to Dagwood Bumstead.

The Taber Art Gallery at Holyoke Community College is pleased to present "Gary Hallgren: A Restrospective," an exhibit of Hallgren's cartoons, sketches, paintings and sculpture, now through Feb. 21. The gallery will host a reception on Thursday, Feb. 7, from 5 to 7 p.m., with a talk by Hallgren beginning at 5:30 p.m.

"Pop art can be about more than art or culture," Hallgren says in an artist's statement. "It can be about that most universal of themes: the human condition. Familiar newspaper comics characters can carry much symbolism on their black-and-white backs after being infused with the gravitas of easel painting."

Hallgren's freelance illustrations and parodies have appeared in such mainstream publications as Time, The New York Times, The Wall Street Journal, Entertainment Weekly and Premiere – and also National Lampoon, Mad, Marvel Comics, Screw, and many others.

"Gary's bold designs, distorted realities, finished and unfinished surfaces, canonized humor and joy of painting are clearly present in this exhibition's selections from his expansive body of work," said Taber Art Gallery director Amy Johnquest. "We really need a much larger gallery to properly show his enormous body of work."

Since 2003, book illustration has been a mainstay for Hallgren. He illustrated You: An Owners' Manual, by doctors Mehmet Oz and Michael Roizen, which was published in 2005 and has sold over a million copies in hard cover. He continues to supply finished drawings for the "Hagar The Horrible" comic strip.

Hallgren holds a bachelor's degree in painting and design from Western Washington State College. He lives in Granby.

The Taber Art Gallery at HCC is open Monday through Thursday 10 a.m. to 5 p.m. during regular school sessions. It is free and open to the public and located through the HCC Campus Library lobby on the second floor of the HCC Donahue Building, 303 Homestead Ave., Holyoke. For more information, please contact Amy Johnquest, director of the Taber Art Gallery, at 413.552.2614.

PHOTOS by CHRIS YURKO: Artist Gary Hallgren poses with one of his latest works, "Grim Reaperette. Manequin with costume and props. 2018." "Sometimes 3D has more force than drawing," he says.