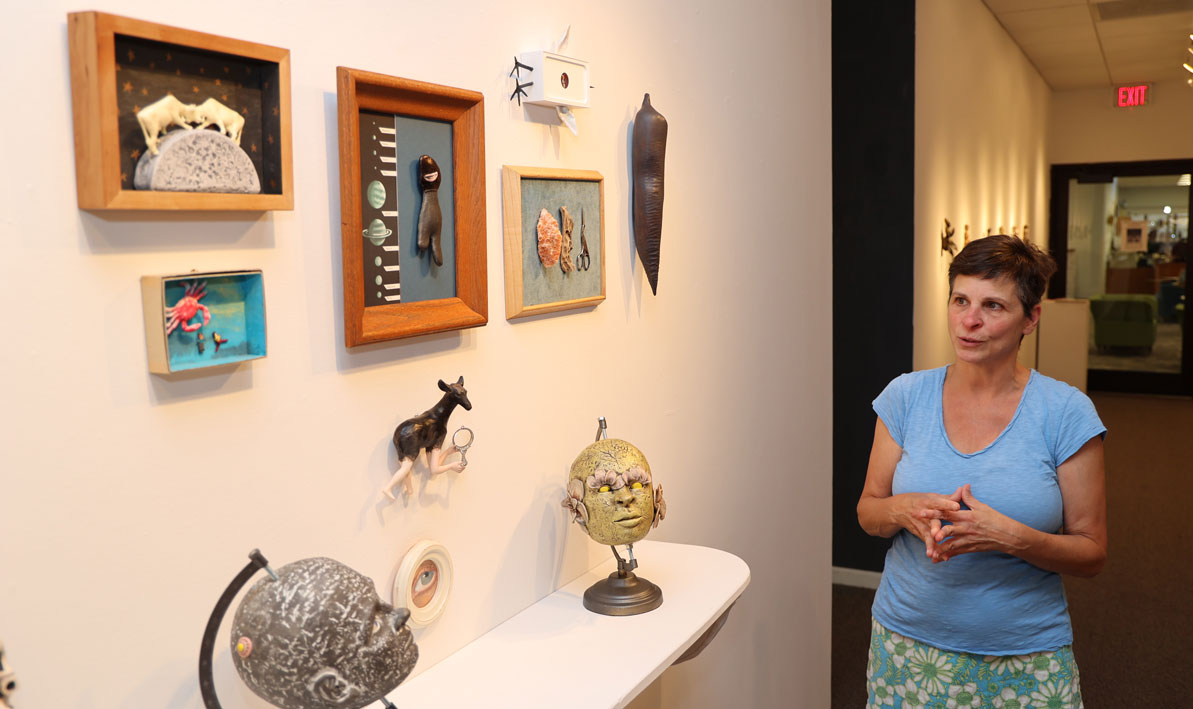 The pieces in artist Maryanne Benns's new show at Holyoke Community College, "Accessories Not Included," look like small versions of the female figureheads that might once have graced the prow of an ancient Greek ship.

"These gals are part superhero, part mythological, and all woman," says Benns. "They are the action figures I wish I had had when I was a girl in the '60s, and the ones I want now."

The pieces in Benns's other new show at HCC, "Curiosities From the Anthropocene and Yonder," incorporate found objects with molded ceramics and reflect the impact of humanity on the planet.

"I lost my parents, and I lost the home that I grew up in, and so it's sort of the same feeling," says Benns – "losing that security of home, but on a bigger scale."

Taber director Amy Johnquest says putting the two distinct shows in the gallery at the same time adds up to something greater than the sum of their parts.

"Each piece has its own sensibility and curiosity about it," says Johnquest, "and a viewer could come up with a narrative about what they're looking at that's different than Maryanne's. Each piece stands alone but also works well beside the others. I feel like the two shows talk to each other."

Benns, who lives in Chicopee and maintains a studio at Paper City Studios on Race Street in Holyoke, is known primarily for her surrealist ceramic sculpture. She studied visual arts at HCC, which she entered as a non-traditional student in 1998 through the Women in Transition program, now called New Directions for Adult Learners. She graduated with her associate degree in 2002.

"I had my son when I was young and all of my teen years into my 20s were spent focused on paying the bills," Benns said earlier this week as she finished installing pieces for her show(s). "When I came here, I was completely lost. But the instructors were really good. Very patient. Being roughly the same age as a lot of the instructors really made a difference because it was like making friends. I felt safe. I felt protected. They answered all my questions no matter how silly they were. It really means a lot for me to have a show here because this is where I found my voice as an artist. It's kind of like coming home."

For the past seven years, Benns has been teaching ceramics at senior centers throughout western Massachusetts, as well as online, and in studios around the Pioneer Valley. Her work has been shown in galleries, museums, and hardware stores east of the Mississippi.

The Taber Art Gallery, located of the lobby of the HCC Library on the second floor of the HCC Donahue Building, is free and open to the public Monday through Thursday 10 a.m. to 5 p.m. during regular school sessions.