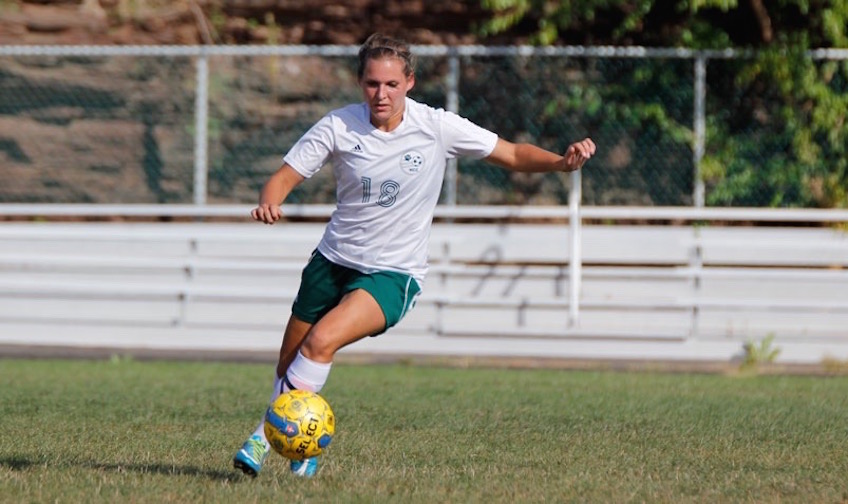 Lady Cougar soccer player Jennifer Galindo has been selected First-Team NJCAA All-American for the 2016 season. Galindo tops a list of several women's soccer players earning honors for the past season, including six who have been chosen to the All-Region (All-New England) Team.

Jennifer Galindo (South Hadley, MA / Chicopee Comprehensive HS) - Sophomore, Defensive Center Midfielder, #18
2016 - NJCAA 1st Team All-American, 1st Team All-New England, Lady Cougars' Most Valuable Player (MVP)
2011 - 1st Team All-New England
Jennifer Galindo was one of the Cougars' most dominant players all season; she has exceptional skill with the ball, tremendous vision of the field, and outstanding offensive and defensive abilities. Galindo is an extraordinary distributor of the ball, making brilliant short passes as well as serving perfect long through balls. She led the team in assists (13) while finishing second in overall points (37) and goals (12) from her defensive position. Her 21 career assists are tied for third all-time for Lady Cougars' soccer.

Natalie Galindo (Chicopee, MA / Chicopee Comprehensive HS) - Sophomore, Attacking Center Midfielder, #14
2016 - 1st Team All-New England
2015 - NJCAA 1st Team All-American, 1st Team All-New England, Lady Cougar's Most Valuable Player (MVP)
Natalie Galindo was the Lady Cougars most dynamic offensive player this season. She led the team in goals (15) and points (42) and was tied for second on the team in assists (12). Additionally, she led the team with four game winning goals. In 2015, during her freshman season, Galindo led the team in goals, assists and points. She is Lady Cougar Soccer's sixth all-time leading scorer with 80 points and her 30 career goals and 20 career assists are each fifth all-time.

Olivia Neiswanger (Holyoke, MA / Cathedral HS) - Sophomore, Forward, #3
2016 - 1st Team All-New England, team captain
2015 - 1st Team All-New England
Neiswanger was one of the Lady Cougar team captains this year; she was the team's emotional leader, displaying relentless work rate and an unmatched desire to compete all season long. She was fourth on the team in goals (10) and tied for second in assists (12) while finishing third overall in points (32). Neiswanger is tenth all-time in points for Lady Cougars' soccer with 60 career points.

McKenzie Wilson (South Hadley, MA / Smith Academy) - Freshman, Center Back, #13
2016 - 1st Team All-New England
Wilson was the team's center back and most dominant defender the entire season. She is remarkable at winning balls in the air and stifling opposing attacking players. Wilson got involved in the Cougar's offensive moving into the attack occasionally to register four goals and three assists for the season.

Allison Zollo (Monson, MA / Monson HS) - Freshman, Center Midfielder, #17
2016 - 2nd Team All-New England
Zollo moved into a center midfield position a few games into the season after starting in a more defensive role. She made an immediate impact from her new position where she was one of the Cougars' best and most active players every single game. Zollo scored an extraordinary eight goals and six assists from the center of midfield over the last 13 games of the season.

Rebekah Herring (Springfield, MA / Palmer HS) - Sophomore, Defender, #19
2016 - Lady Cougar Player Award, team captain
2015 - 2nd Team All-New England
Herring was one of the Lady Cougar team captains this year; she was the team's vocal and organizational leader all season. The Lady Cougar Player Award is an award given to a player who truly exemplifies what it means to be a Cougars soccer player, in the way she carries herself and represents the program both on and off the field. Herring is truly a program player and one who is certainly most deserving of such a prestigious award.