Cougars Draining Threes While on a Roll 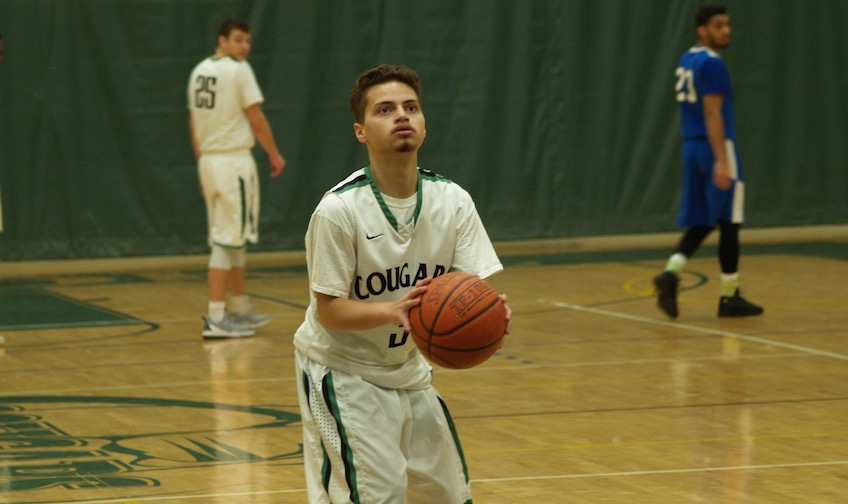 The HCC men's basketball team won back-to-back regional games on consecutive nights this past week. The Cougars travelled to play Roxbury CC on Wednesday, emerging victorious by an 86-60 score. Thursday, they hosted UCONN Avery Point where they earned a 70-58 win. The Cougars trailed at half time in both contests before exploding in each second half to come back and claim victory. Three-pointers proved to be a significant key to Holyoke's success as they drained 15 from long-range on Wednesday before adding five more in Thursday's triumph.

Deon Charles (Springfield, MA / The Renaissance School) led the way offensively for the Cougars in both games, scoring 25 points on Wednesday and 20 points on Thursday. Charles buried an astounding seven three-pointers in the first game and added three more in the second game. Daniel Reyes (Springfield, MA / The Renaissance School) contributed to the offensive barrage in the first contest, having what coach Montemayor described as a "career game." Reyes scored a personal season high 24 points, including a spectacular six three-pointers in Wednesday's win. Darren Fair (Holyoke, MA / Holyoke HS) played two tremendous games, contributing 18 points with two three-pointers in the first game and 14 points the second game. Reilly Miller (Chicopee, MA / Chicopee Comprehensive HS), who is the team leader in points and points per game, scored 33 points over the two games, including 13 points from the free-throw line.  The Cougars now have five wins this season, all in regional play. Their overall record is 5-13 and their regional record is 5-11. They will play four more games this season, including the final three at home. With a few more wins, they could sneak into a play-off position and qualify for post-season play. Let's go Cougars!