Barrage of Shots Not Enough for Lady Cougars 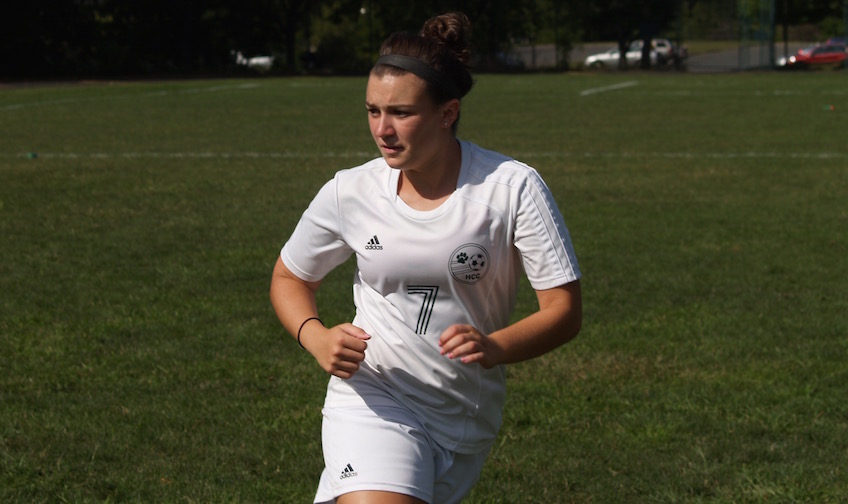 (Garden City, NY) - Sometimes in the game of soccer, no matter what you do, things just are not meant to go your way. That seemed to be the case Saturday for the NJCAA's #9 nationally ranked Lady Cougars who outshot their opposition 26-9 but fell on the scoreboard 3-2. Despite owning a majority of the possession and having the better of the scoring opportunities against out of region opponent Nassau CC, several unfortunate missed chances and in game occurrences cost the Cougars the game.

Holyoke jumped out to a 2-0 lead in the first half as Jennifer Galindo (Chicopee, MA / Chicopee Comprehensive HS) assisted Reilly Jodoin (South Hadley, MA / South Hadley HS) on her first goal of the season before also assisting Noelle Tetreault (Monson, MA  /Monson HS) on what was her first goal as a colligate player. Tetreault's goal came on her very first touch of the ball as a college soccer player, as the freshman forward scored just a few minutes after stepping onto the field. It looked like the Cougars were headed for victory but a second half full of thwarted scoring chances and an unfortunate red card led to a heartbreaking finish to the game. After hitting the post and crossbar four times and missing countless chances to put the game away, the Cougars were reduced to just 10 players while the score was 2-1 in their favor. With just four minutes left until the final whistle blew, Nassau tied the game at 2-2 before scoring early in the overtime period to defeat the Cougars. Despite the loss, Holyoke is confident that if they continue to play well and are able to finish scoring chances, an unfortunate result like this certainly won't occur all too often.

Up next for the Lady Cougars is their home opener at O'Connell Field at 4 p.m. on Wednesday, September 7. Holyoke welcomes in American International College JV for Wednesday's match-up. Let's go Cougars!

Photos: (Main) Reilly Jodoin shows great concentration as she gets open for a pass. (Thumbnail) Jennifer Galindo takes a shot on goal.