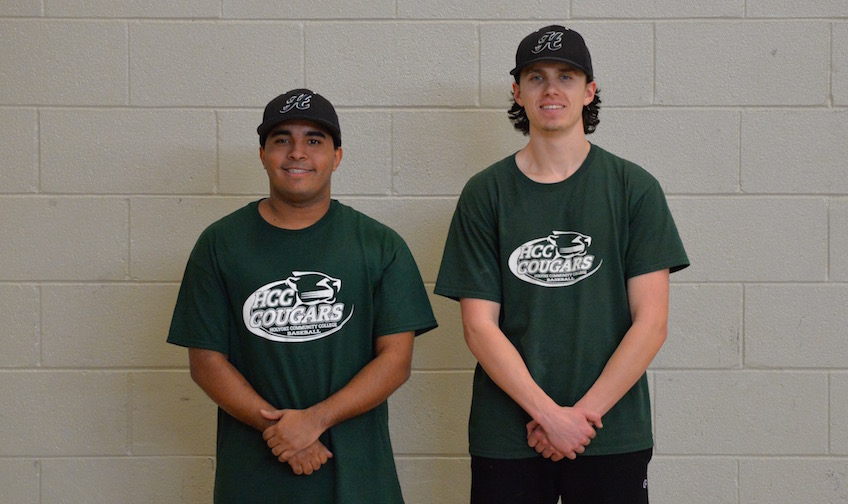 The HCC baseball team will open the 2018 season this Saturday when they travel to New York to play a double header at Westchester CC. The Cougars have worked hard through the preseason, practicing indoors at the Bartley Center and adding outdoor trainings on Cougar Field when the weather allows. The Bartley Center's PeoplesBank Gymnasium is well equipped for baseball, having all the needs the team could ask for from an indoor facility, including a batting cage.

The Cougars are led by head coach John Crowley, who enters his fourth season at the helm. Joining Crowley as an assistant coach will once again be his son Zach Crowley who is a former HCC baseball player as well as a fellow fourth year coach. The Cougars team, which has a promising outlook for 2018, will open the campaign with 18 players on their roster, including two players who are back from last year's squad. Returning from last season are sophomores Hector Dejesus (Guayama, PR / Northampton HS) and Kyle Hubbard (Northfield, MA / Pioneer Valley Regional HS). Dejesus played predominantly in the outfield last spring while also seeing a few innings as a pitcher. Hubbard was primarily a pitcher in 2017, making nine appearances on the mound while also playing several games as an outfielder.

Holyoke's adversary this weekend happens to be a particularly strong Division II NJCAA team; the Cougars hope the tough opposition will help prepare them for their regional New England opponents. Last year, HCC qualified for the New England Championship Tournament and this year's group looks to do likewise. Holyoke will play their first regional game in their home opener on Thursday, March 29th at 3:30pm when they host Quinsigamond CC. They will play at least one more challenger between this weekend's opener and their home opener and may have a few games added to their schedule to be played in the upcoming weeks. Let's go Cougars!

Photos: (Main) Sophomore returners Hector Dejesus (L) and Kyle Hubbard (R) pose for a snapshot during a recent indoor practice session. (Thumbnail) Dejesus at the plate during a 2017 home game.