Cougars Victorious in Both Games of Doubleheader 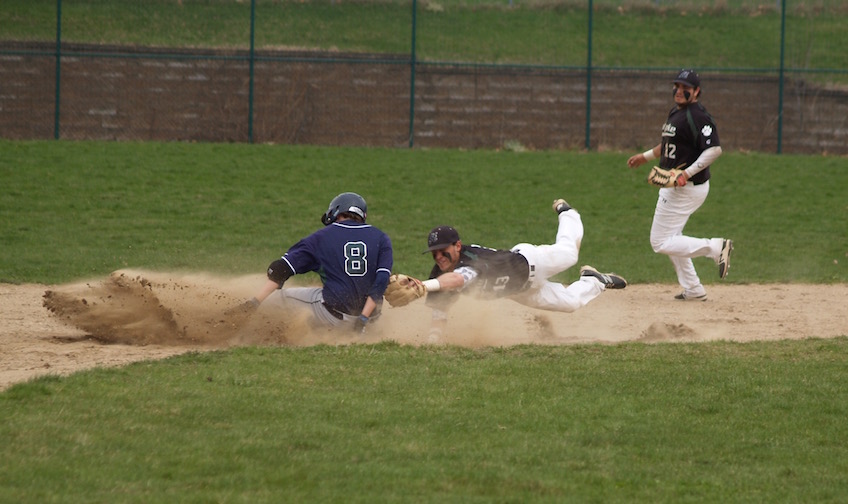 (Holyoke, MA) - The Holyoke CC Cougars Baseball team won their first two games of the season on Saturday while playing in the friendly confines of Cougar Field for just the second time this year. The Cougars were spectacular at the plate and, along with their strong bats, displayed some phenomenal base running on way to a 12-1 and 11-1 victory over regional opponent Mass Bay CC. Holyoke batted 11 of 24 from the plate in game one and 14 of 27 in game two. They stole a combined 17 bases during the two contests.

Second baseman Eván Torres (Holyoke, MA / Holyoke HS) led the way offensively for the Cougars, blasting two home runs while batting a perfect 4 for 4 from the plate in game one before hitting 2 for 4 in game two. Torres drove in five RBIs in the double header while scoring five runs and stealing three bases. Jose Lopez (Holyoke, MA / Holyoke HS) batted a combined 4 for 5 over the two games and stole five bases while registering three runs scored. Jacob Whitacre (Granby, MA / Granby HS) had three hits in the double header and stole four bases while scoring three runs. Whitacre was also on the mound for game two and the winning pitcher for the contest, throwing three strikeouts while giving up just one run on three hits. The winning pitcher for game one was Matthew Wojnar (Holyoke, MA / Holyoke HS), who threw an impressive ten strikeouts on way to victory. Wojnar gave up just one run on four hits and also drove in three RBI's from the plate in that first game.

The Cougars have a respectable 2-2 record at home and a 2-4 record regionally. Their overall record is 2-8 and these two big regional wins keep them in contention for a spot in the New England Championship Tournament at the midway point of the season. Let's go Cougars!!

Photos: (Main) Jacob Whitacre (#13) tags out a base runner that slides for second base with teammate Eván Torres (#12) looking on. (Thumbnail) Eván Torres during an at bat that resulted in one of his two homeruns in the game.