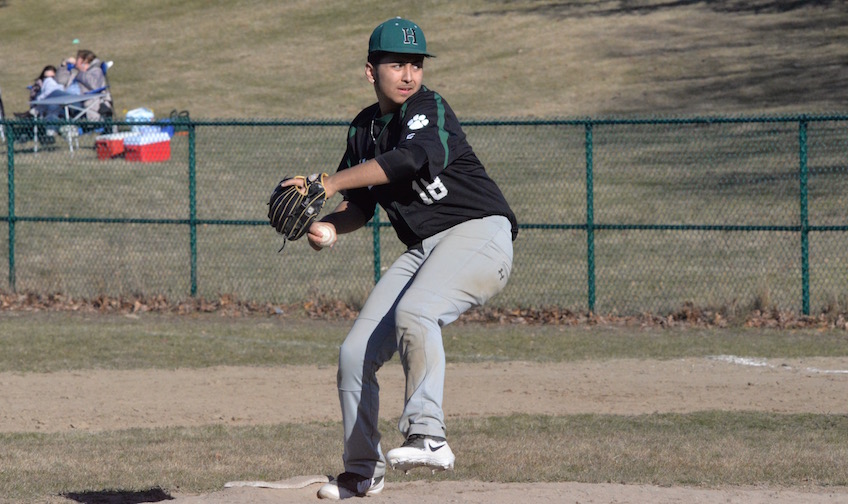 (Holyoke, MA) - The Cougars baseball team was in remarkable form this past Saturday, earning a pair of victories while playing at home for just the second time this season. Holyoke hosted a doubleheader at Cougar Field against regional rival Bunker Hill CC. The Cougars won the first game 13-9 before also emerging victorious in game two by a 6-3 score. Holyoke's bats led the way in game one as the Cougars registered 14 hits that included five doubles, leading to their 13 runs. In game two, outstanding pitching, strong defense and superb base running were the keys to victory.

Third basemen and pitcher Darien Rosado (Chicopee, MA / Chicopee HS) and shortstop Max Molta (Agawam, MA / Agawam HS) led the way for the Cougars on Saturday. Rosado and Molta each batted 3 for 4 from the plate and scored three runs in game one. Rosado started game two on the mound, giving up just four hits while throwing for nine strikeouts and pitching a complete game in victory. At the plate, Rosado added one hit and one run during the second game and had two total RBIs on the day. Molta was 2 of 3 at the plate in game two and added another run. In addition, Molta was one of the Cougars' strongest defensive players over the course of the doubleheader, making several impressive plays from his shortstop position. Jared Iglesias (Westfield, MA / Westfield HS) earned the win from the mound in game one, relieving starting pitcher Will Kennedy (Holyoke, MA / Pope Francis HS). Each pitcher was outstanding and threw for five strikeouts while Iglesias gave up just two earned runs in the final three innings of the first contest. Catcher Alan Eheander (Sheffield, CT / Suffield HS) played a strong game in the first matchup, batting 2 for 4 while driving in two RBIs and scoring a run.

The Cougars have a regional record of 2-1 in the early part of the season and their overall record improved to 2-4. Holyoke will play their next game this Thursday, April 5th when they host Northern Essex CC at Cougar Field at 4:00pm. Let's go Cougars!

Photos: (Main) Darien Rosado throws a pitch during game two of Saturday's doubleheader. (Thumbnail) Max Molta at the plate during game one.