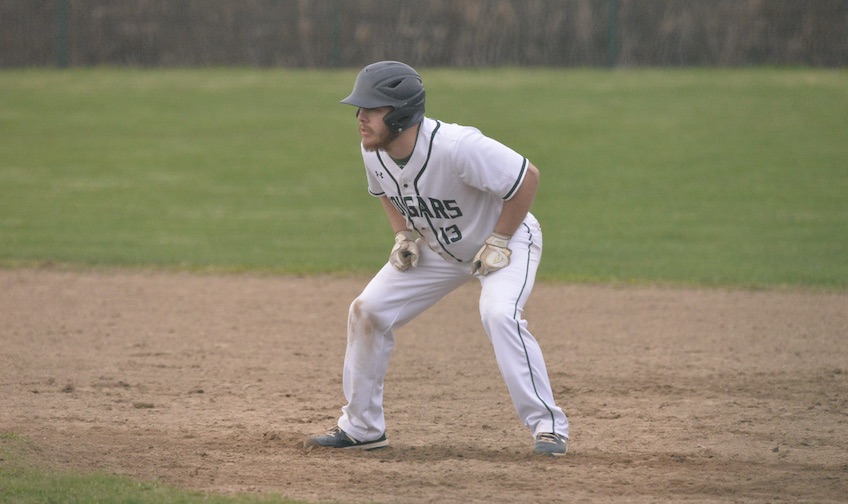 (Holyoke, MA) - Baseball jumped out to an early 6-0 lead on their way to a 10-9 home win over regional opponent Quinsigamond CC on Thursday afternoon. The Cougars never trailed in the contest, even with their opposition keeping the score very close. Holyoke tallied a pair of four-run innings in the victory.

Nicholas Kruezer (Suffield, CT / Suffield HS), the Cougars designated hitter in the game, was outstanding at the plate. Kruezer hit 3 for 5 with a home run and three RBIs. First baseman Zackary Jenks (Belchertown, MA / Belchertown HS) batted 3 for 4 with three runs scored. Pitcher James McGann (Suffield, CT / Suffield HS) earned the win on the mound, his first of the season, to go along with his pair of saves. James Pryzbycien (Palmer, MA / Palmer HS) pitched in relief, earning this game's save.

The Cougars improve their regional record to 3-5 with the win. They are 3-8 overall. Holyoke will travel to Quinsigamond CC on Saturday to play a doubleheader. Their next home game will be on Thursday, April 28th at 3:30pm against Northern Essex CC. Let's go Cougars!

Photos: (Main) Kruezer taking a lead off of first base during Thursday's win. (Thumbnail) McGann hurls a pitch in the early innings of the victory.