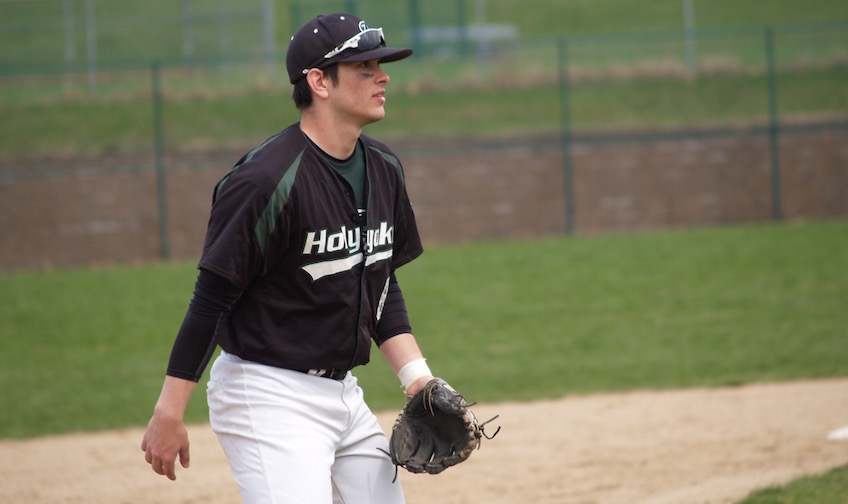 (Holyoke, MA) - The Cougars baseball team had everything to play for this past Sunday when they hosted regional opponent Bunker Hill CC for a doubleheader at Cougar Field. The Cougars knew they would need to win both games to qualify for post-season play and earn a spot in the New England Championship Tournament. Trailing in the final innings of each game, Holyoke came through in tremendous comeback fashion to win each game in its final inning.

Several Cougars had outstanding performances in the doubleheader and helped lead the way to victory. Jake Whitacre (Granby, MA / Granby HS), who has been stellar all season, batted a brilliant 5 for 6 from the plate over the course of the two games. Whitacre scored six runs and drove in three RBIs while also stealing four bases. Willis Pollard (Worthington, MA / Williston Academy) was fantastic with the bat, hitting 5 for 9 from the plate while scoring four runs and driving in a pair of RBIs. Eván Torres (Holyoke, MA / Holyoke HS) batted 5 for 9 from the plate and hit his team-leading third home run of the season. Torres had five runs, four RBIs and three stolen bases in the doubleheader and, as a relief pitcher for just one inning, earned the win in game two. Austin Harris (Ludlow, MA / Ludlow HS) was the winning pitcher in game one, striking out three batters. Harris was also strong at the plate over the two contests, registering five hits, two runs and four RBIs.

The Cougars end the regular season with a very respectable 6-9 regional record and a 6-15 overall record. They enter the New England Championship Tournament, hosted by Massasoit CC, as the #4 seed and will square off against #1 seed Northern Essex CC on Friday at 3pm. A win by Holyoke on Friday would put them into a championship game to be played on Saturday or Sunday and a loss on Friday would put the Cougars into a consolation game. Let's go Cougars!!