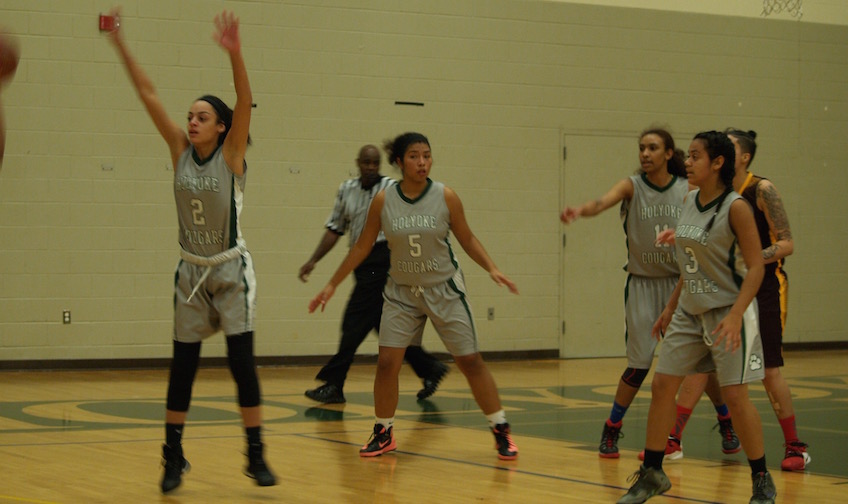 The HCC men's and women's basketball teams have worked very hard through the first full month of the season and are ready to roll into December with some big games on the horizon. The Cougars women started their season with an impressive 43-37 win before dropping three straight to fall to 1-3-0 overall. The Cougar men picked up a gratifying victory by way of a 93-92 score in their fourth game of the season. Despite playing several extremely close games, the men are just 1-7-0 overall on the year. Both teams have a tough schedule, playing against some very strong opponents, and both have competed exceptionally hard in all of their contests thus far.

The Lady Cougars have been led offensively by Bethany Serrano (Holyoke, MA / Paulo Freire Charter School), who is averaging just over 12 points per game while scoring a season high of 17 points in her team's only home game of the year. Yesenia Leon (Springfield, MA / Putnam Vocational Technical HS) has been strong offensively, averaging almost nine points per game. Taylor Lesure (Amherst, MA / Amherst HS) has played superb defense for the Cougar women and is among the team's strongest rebounders. The Cougar men have been led offensively by Reilly Miller (Chicopee, MA / Chicopee Comprehensive HS), who is averaging 22.5 points per game. Miller scored a season high 31 points in three different games this year, including the Cougars' win. Deon Charles (Springfield, MA / Renaissance School) has played remarkably well and is averaging 14 points per game; his season high in a game is also 31, which he scored in the team's last contest. Charles leads the Cougars in three-pointers this season having sunk 12 of them on the year.

The Cougar men will host games at the Bartley Center on Tuesday, December 6th at 7 p.m. and Thursday, December 8 at 6 p.m. The Lady Cougars play their next contest on the road before hosting the first game of a double header on Saturday, December 17 at 1 p.m., followed by the men at 3 p.m. Let's go Cougars!