Cougars Fight to the Finish 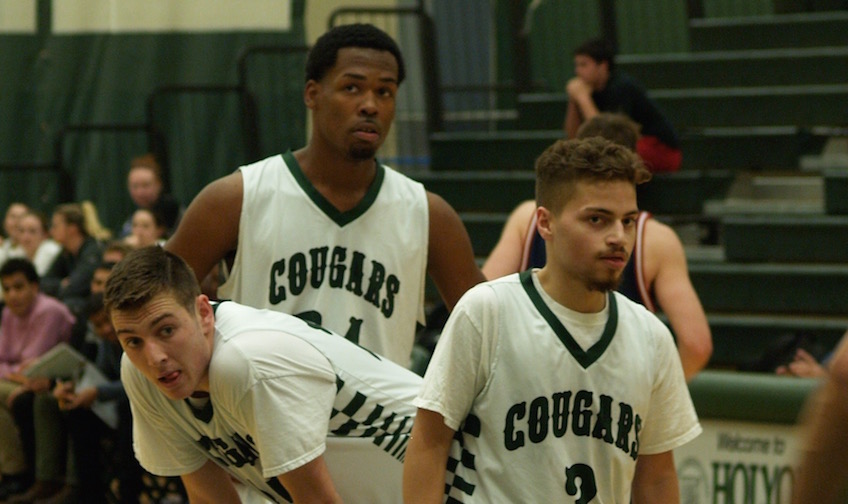 (Holyoke, MA) - The Holyoke Community College men's basketball team played very well down the home stretch but unfortunately saw their season come to an end with a loss on Monday night. The Cougars kicked off February with consecutive wins and, despite their five regional victories, failed to qualify for the New England Championship Tournament and post-season play. Holyoke finishes the year with an overall record of 5-16 and a regional record of 5-14. The Cougars played extremely determined basketball all season long with a team comprised solely of freshmen. The young group improved steadily as the season progressed and played particularly well in the second half of the year with their roster slightly depleted.

Several Cougars had impressive campaigns this year, including the team's leading point scorer Reilly Miller (Chicopee, MA / Chicopee Comprehensive HS). Miller, a forward and center, scored an impressive 435 points this season and averaged 20.7 points per game and 12 rebounds per game. Miller's season high for points in a game was 31, a feat he accomplished on three different occasions. Deon Charles (Springfield, MA / The Renaissance School), the Cougar's point guard, also had a terrific season, scoring 343 points on the year. Charles buried a remarkable team-leading 45 three-pointers this season while also leading the Cougars in assists with 76. Charles was absolutely spectacular on free throws, averaging over 81% from the line. Miller and Charles were the only two Cougars to play in and start in all of Holyoke's 21 games this season. Forwards Darren Fair (Holyoke, MA / Holyoke HS) and Michael Vecchiarelli (Agawam, MA / Agawam HS) both had solid seasons for Holyoke, especially in the second half of the year. Each player averaged over five rebounds per game while pitching in offensively in some crucial games. Fair took only 18 foul shots for the year but drained 15 of them for an outstanding 83% average from the free throw line. Guard Daniel Reyes (Springfield, MA / The Renaissance School) and forward Samuel Fleck (Longmeadow, MA / King Phillip Regional HS) joined the Cougars midway through the season and both contributed to the team's stellar play in the latter part of the year. Reyes had a monstrous game in one of the Cougars' victories where he registered six three-pointers on his way to a 26-point performance.    The Cougars basketball team will put a nice finishing touch on their season this Thursday evening with an awards banquet to be held on campus. HCC's culinary staff will supply what should prove to be another outstanding dinner.