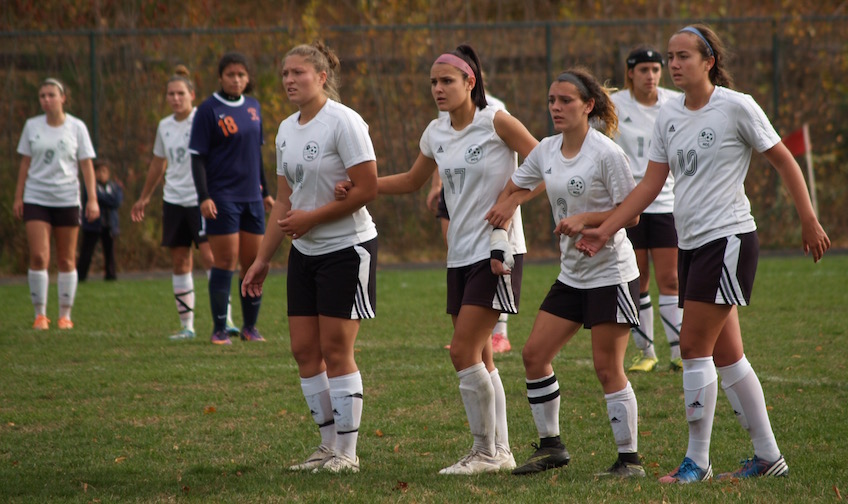 The Lady Cougars played well enough to win and even had the better of the scoring opportunities throughout the contest, but a victory was just not meant to be. Holyoke has shown an inability to finish their scoring chances at times this year and that shortcoming came back to haunt them at the most inopportune time of the season. Natalie Galindo (Chicopee, MA / Chicopee Comprehensive HS), who played an outstanding game, rang a blistering shot off the cross bar in the second half in what was the Cougars' best scoring opportunity. Olivia Neiswanger (Holyoke, MA / Cathedral HS) and Allison Zollo (Monson, MA / Monson HS), both played brilliantly, and each saw a glorious goal scoring chance slip away. McKenzie Wilson (South Hadley, MA / Smith Academy) played a phenomenal game for the Cougars and was one of the best players on the field for either team. Reilly Jodoin (South Hadley, MA / South Hadley HS) played remarkably well, showing tremendous heart and determination in her first game back from a severely sprained ankle and torn tendon. Despite excruciating pain, Jodoin not only played and ran hard, but was also very effective and had stellar game. Allie Stuetzel (Feeding Hills, MA / Agawam HS) also played exceptionally well for the Cougars, running relentlessly as she has all year.

The agonizing loss kept the Lady Cougars from their goal of qualifying for the National Tournament, something a team this talented most certainly deserved. Despite the brutally painful loss in the Sunday's game, Holyoke is proud of their strong season. The Cougars end with an overall record of 15-6-0 while sporting a record of 13-3-0 against NJCAA Div. III opponents. They were a perfect 11-0-0 in Region XXI and captured the New England Championship. The team set an all-time HCC women's soccer program record for consecutive wins by putting together 12 straight victories. Holyoke scored 86 goals while giving up just 21 over their 21 games played and they registered 11 shutouts. The Lady Cougars were in the NJCCA's Div. III top 10 national rankings for a good part of the season and will have six of their players selected to the All-New England (All-Region) team.