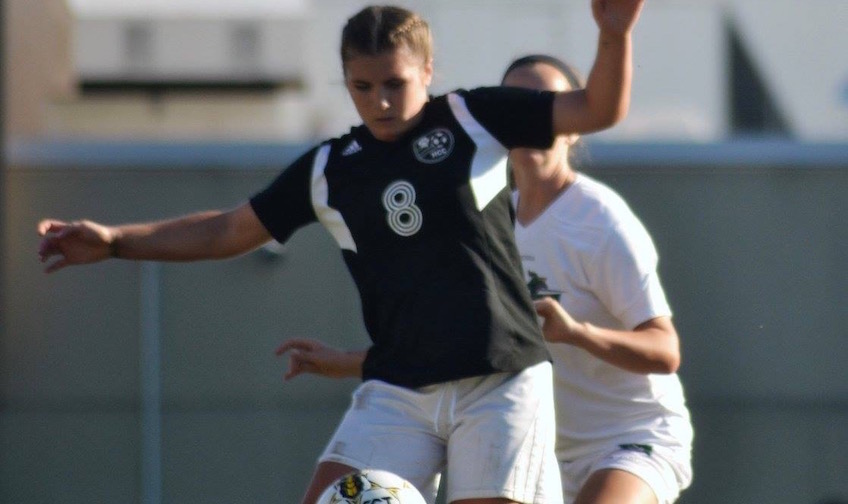 (Lincoln, RI) - The Lady Cougars traveled to CC of Rhode Island on Thursday to square off against one of their toughest opponents of the season in the Lady Knights. Holyoke plays CCRI just once per year and has beaten the very strong Division I program on only one occasion in the past decade. That is until yesterday, when the Cougars earned a hard fought 2-1 victory over this tough opponent.

With the Cougars trailing 1-0 late in the first half, forward and co-captain Olivia Neiswanger (Holyoke, MA / Cathedral HS) tied things up at 1-1 with a goal assisted by Natalie Galindo (Chicopee, MA / Chicopee Comprehensive HS). Midfielder Allie Stuetzel (Feeding Hills, MA / Agawam HS) scored the game-wining goal with her clutch finish in the 85th minute, assisted by Allison Zollo (Moson, MA / Monson HS). HCC received another stellar performance from Jennifer Galindo (South Hadley, MA / Chicopee Comprehensive HS) and welcomed back Holly Wardwell (Granby, MA / Granby HS), who played brilliantly in her first game of the season returning from an injury. The Cougars' coaching staff called the second half of the game "the best 45 minutes we've played all season" as Holyoke's relentless work rate and competitive drive put their opponents completely on their heels.

Thursday's colossal victory is the Lady Cougars' fourth win in a row and most certainly the biggest win of the season to this point. Holyoke's next match will be a home game on Saturday, September 24 at 1 p.m. against regional challenger Bristol CC. Let's go Cougars!

Photos: (Main) Allie Stuezel battles for a loose ball against a CCRI player. (Thumbnail) Olivia Neiswanger has a scoring opportunity in an early season game.