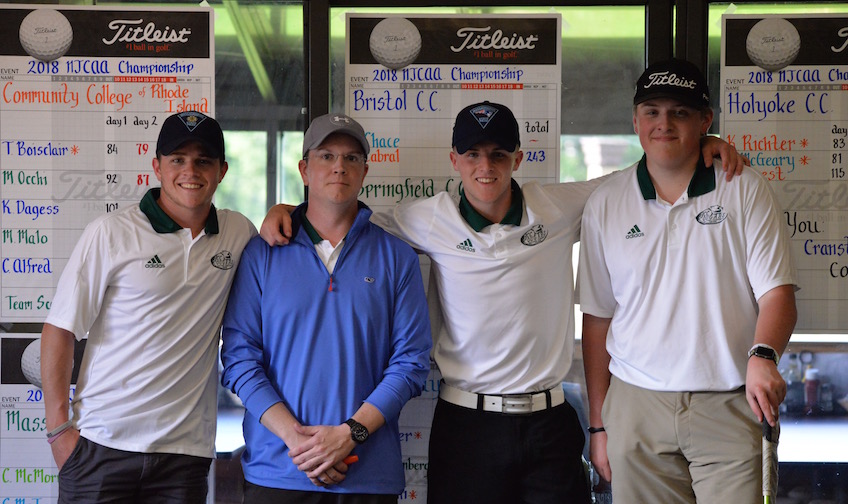 (Cranston, RI) - Two members of the Cougar golf team qualified for the NJCAA National Tournament by way of their impressive performances at this week's New England Regional Championship. Kyle Richter (East Longmeadow, MA / East Longmeadow HS) and Ryan McGeary (Agawam, MA / Agawam HS) both played outstanding golf at the two-day regional event held at Rhode Island's Cranston Country Club on May 22nd and 23rd. The regional championship crowns a team champion whose entire team advances to nationals, along with the top six best scoring individual golfers who are not from the winning team. The NJCAA National Golf Championship is a four-day annual event to once again be held at Chautauqua Golf Club in Chautauqua, NY on June 5-8.

Cougar Kyle Richter finished second overall in the regional championship, just one stroke off the lead, with a two-day total score of 159. Richter shot an 83 on day one before registering the tournament's best round of 76 on day two. His tournament was highlighted on day two by an eagle on the course's par four sixth hole. Richter holed in from 150 yards out to accomplish the extraordinary feat. HCC's Ryan McGeary was among the top six finishers, tallying a first day score of 81 and two-day total of 167. McGreary was tremendous from the tee box all tournament and sank several key putts to stay atop the event's leader board.

Massasoit CC won the overall team championship while Mass Bay CC's Nick Barber was the event's individual champion. Holyoke is one of two New England colleges to have two of its athletes qualify for the national championship based on individual scores. HCC wishes the best of luck to both Richter and McGeary at the NJCAA National Championship. Let's go Cougars!!