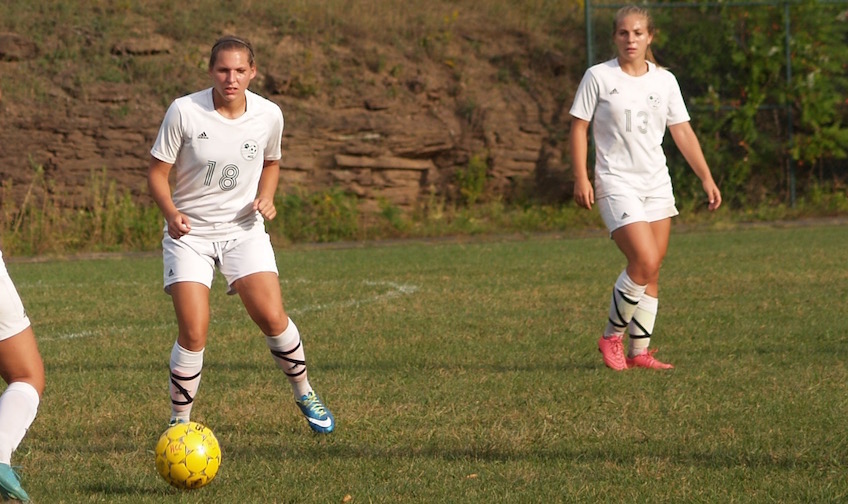 The Holyoke Community College women's soccer team, currently ranked #10 in the NJCAA national rankings, closed out their regular season this past weekend with a pair of praiseworthy games. Holyoke hosted Division I powerhouse ASA College of NY on Saturday before traveling on Sunday to square off against regional opponent Bristol CC. Saturday's result was a respectable one; despite losing 3-0, the Cougars allowed just three goals to one of the top Division I NJCAA teams in the country. ASA has victimized several top Division III teams this year, including the three-time defending national champions, whom ASA defeated 9-0 earlier this season. On Sunday, Holyoke put a finishing touch on their regular season with a 6-1 victory over Bristol.

Jennifer Galindo (South Hadley, MA / Chicopee Comprehensive HS) led the Lady Cougars throughout the weekend, playing brilliantly in both contests, just as she has throughout the season. Galindo made several significant defensive plays in Saturday's game before leading Holyoke offensively in Sunday's win with two goals. Alli Stuetzel (Feeding Hills, MA / Agawam HS) and Emma Gomes (Ludlow, MA / Ludlow HS) both played very well, while adjusting remarkably to an added defensive responsibility versus ASA. Each midfielder carried her strong performance into Sunday as Stuetzel had two assists and Gomes tallied one. Natalie Galindo (Chicopee, MA / Chicopee Comprehensive HS) and Holly Wardwell (Granby, MA / Granby HS) each had a goal and an assist in Sunday's win while Taydrah Clinton (Springfield, MA / Renaissance School) and Allison Zollo (Monson, MA / Monson HS) each scored a spectacular goal. McKenzie Wilson (South Hadley, MA / Smith Academy) was one of the strongest players on the field in both games, playing extremely well for Holyoke.

The Lady Cougars finish the regular season with an overall record of 14-5-0. Their regional record is a perfect 10-0-0 and they will be the top seed heading into the New England Championship Tournament, which will be hosted by HCC. The Cougars registered 10 shutouts this season with eight of those coming against regional opponents. They set a new all-time consecutive wins record for the HCC women's soccer program with a 12-game winning streak. The Cougars' next game will be a New England regional semi-final, played at home this Saturday at 11:30 a.m. against an opponent to be determined. If victorious, Holyoke will play in the New England championship game on Sunday at 12 noon. Let's go Cougars!