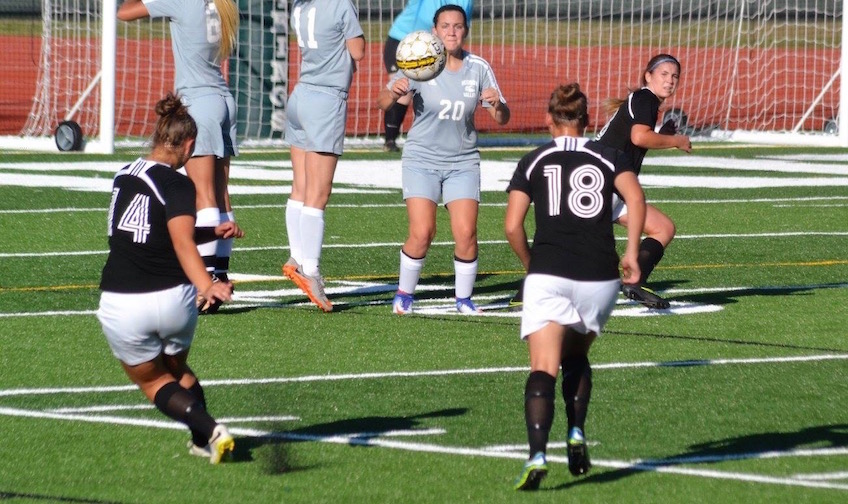 (Troy, NY) - The Lady Cougars traveled to Hudson Valley CC on Wednesday afternoon to play against a very capable Lady Vikings team. Hudson Valley plays in the NJCAA's Region 3, which consists annually of some of junior college soccer's strongest Division III teams. The Cougars, who have won their previous eight games, were ready to play right from the opening whistle. Holyoke scored just two minutes into the contest and came away with a decisive 3-0 victory.

Liv Neiswanger (Holyoke, MA / Cathedral HS) opened the scoring for the Lady Cougars with the early goal. Neiswanger outworked two of her opponents arriving first to a loose ball that she one-timed into the back of the net. Natalie Galindo (Chicopee, MA / Chicopee Comprehensive HS) scored the Cougars' second goal with a beautiful low shot that glanced off the left post and in. Jennifer Galindo (South Hadley, MA / Chicopee Comprehensive HS) had the third tally as she blasted a brilliant shot from 35 yards out that sailed over the outstretched hands of the opposing goalkeeper. Neiswanger had an assist to go along with her goal, while defenders Catherine Hotham (Southampton, MA / Hampshire Regional HS) and Beky Herring (Springfield, MA / Palmer HS) both registered an assist as well. Goalkeeper MyKaela O'Connell (Brimfield, MA / Palmer HS) made eight saves in the victory and earned her seventh and the team's eighth shutout of the season.

The Lady Cougars have now won nine straight games and have an overall record of 10-4-0. They play two New England regional opponents this weekend and look to add wins to their perfect 6-0-0 record in regional play. Holyoke will host Bunker Hill CC on Saturday, October 1 at 1 p.m. in the Cougars' annual Pink Out game in honor of breast cancer awareness. They will then travel on Sunday, October 9 to play at Quinsigamond CC at 1:30 p.m. The Cougars won handily when facing each opponent earlier this season. Let's go Cougars!