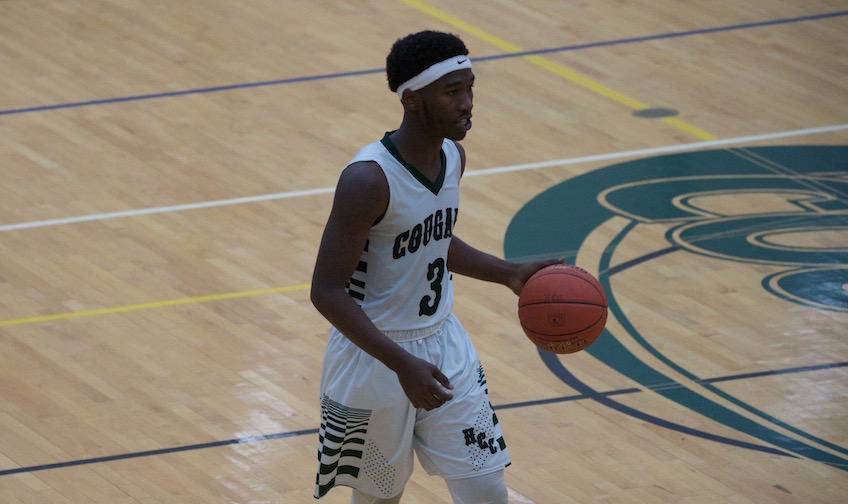 (Holyoke, MA) - Cougars basketball remained hot in February, winning their final two games of the season. Holyoke defeated UCONN Avery Point 73-70 this past Monday before beating Ben Franklin Institute 85-76 to close out the season on Wednesday. Both victories came on HCC's Golas Court where the Cougars won all five of their home games this month.

A trio of Cougars registered a double-double in each game and on Monday all five of Holyoke's starters had double digits in points. Jequan Rogers (Springfield, MA / Sabis HS) led the way on the scoreboard with 30 points in the season finale after scoring 16 on Monday. He brought down a total of 21 rebounds and tallied 13 assists during the pair of wins. Michael Castillo (Northampton, MA / Northampton HS) scored 23 points Wednesday, including five three-pointers. He scored 16 on Monday and had 22 rebounds in the two games. Chevron Owens-Cote (Chicopee, MA / Chicopee HS) had 14 points and ten rebounds in the first win and 12 points and 10 rebounds in the second win. Sam Monette (Springfield, MA / Hampden Charter HS) had 13 points on Monday and sank six three-pointers in the pair of games. Cequan Johnson (Springfield, MA / Springfield Sci -Tech HS) had 13 points in the first win and 13 rebounds over the final two contests.

The Cougars finish the season on a five-game home winning streak. They were 5-0 on Golas Court in February and 5-1 overall in the month. They end the season with a regional record of 5-19 and an overall record of 5-21.