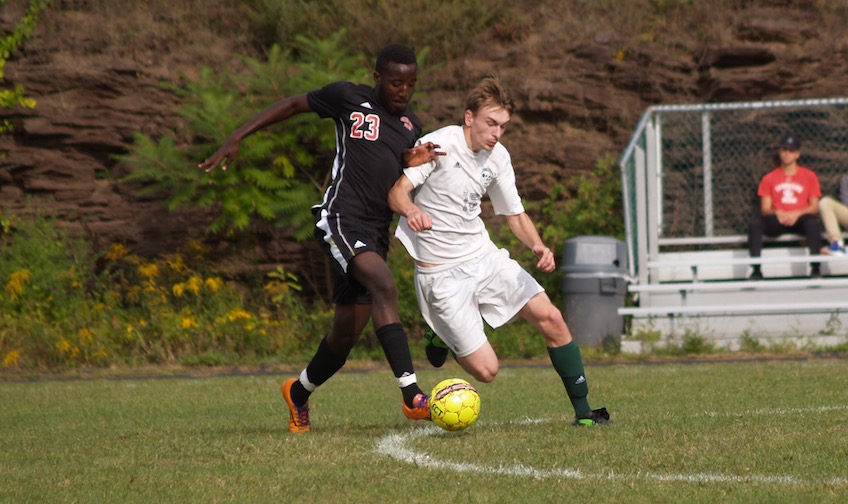 The HCC men's soccer team has kicked off the 2017 campaign with a series of very tough matchups. The Cougars have played well in the early part of the year and, although they have yet to register a win, have shown promise and have the potential to have a strong season.

Freshman captain Dan McColgan (Southampton, MA / Hampshire Regional HS) has been outstanding for Holyoke, leading the team from his center back position. Coming to the Cougars as a high school standout, McColgan's skill and experience have quickly helped him make an impact as a collegiate player. Sophomore Kyle Beis (Westfield, MA / Westfield HS) has been exceptional for the Cougars with his relentless work rate and passion for the game. Beis scored the team's first goal of the season in their home opener and has led by example throughout the start of the year, showing the younger players what it takes to play at the college level. Coach Abel Durojaiye has been optimistic, knowing that his team will improve by continuing to work hard in training and by learning form their in-game experiences.

The Cougars are off to a 0-3-0 start having played several highly skilled teams early on. They will play a few more away games before hosting a pair of home games in the upcoming weeks. A regional home matchup will be played on Saturday September 23rd as Bristol CC comes to O'Connell Field for a 1pm start. Tuesday September 26th will see Massasoit CC come to town for a 4pm kickoff. Let's go Cougars!

Photos: (Main) Kyle Beis battles for a loose ball in during the first game of the season. (Thumbnail) Dan McColgan in his central defensive position during the home opener.