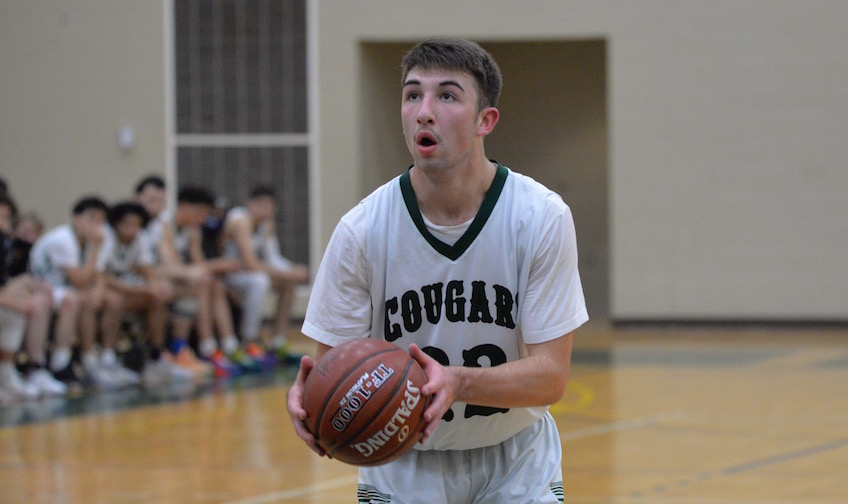 (Holyoke, MA) - The Cougars basketball team secured their first win of the season on Tuesday evening while playing in just their second game. Holyoke defeated regional rival Quinsigamond CC by a 57-55 score to earn the home-court victory. The Cougars put forth a dominant first half performance, building an almost too comfortable lead, before edging out their opponent for the win.

Holyoke relied on teamwork to gain the victory with eight players scoring points in the contest. Each of the eight scorers brought down at least one rebound and five Cougars tallied seven points or more. Bret Robinson (South Deerfield, MA / Frontier Regional HS) led the offense with 13 points, including a trio of three-pointers. With the score tied at 54 late in the game, Chevon Cote (Chicopee, MA / Chicopee HS) sunk two critical free throws to give the Cougars the lead. Cote was 4 of 6 on free throws, scored eight points, and grabbed eight rebounds in the win. Jacob Santos (Holyoke, MA / Holyoke HS) registered ten rebounds for Holyoke.

The Cougars are 1-1 overall and regionally. They play their next game at home this Saturday, November 20th at 1pm versus Quincy College. Let's go Cougars!

Photos: (Main) Robinson takes a foul shot during the first half. (Thumbnail) Cote shoots one of the late-game free throws that he would make.