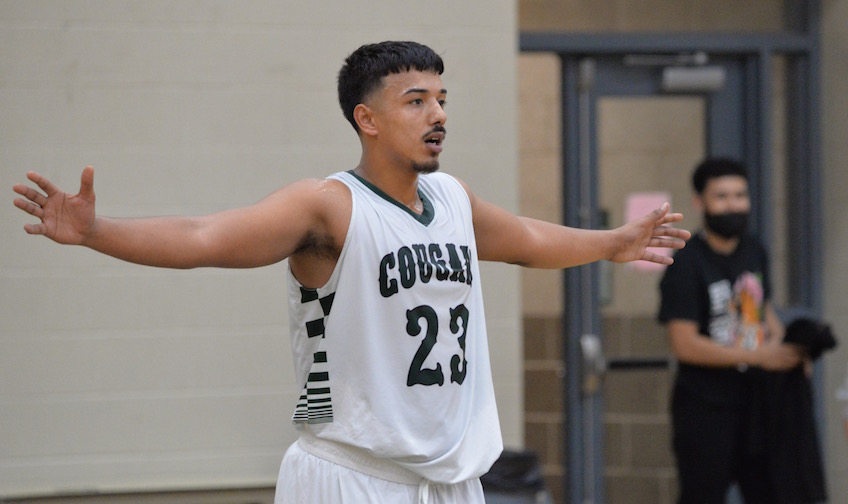 (Holyoke, MA) - Men's basketball closed out the first half of their season with a strong performance this past Tuesday. The Cougars scored a season-high 90 points and, despite a loss, looked very sharp offensively. Holyoke played five games during the first half of the campaign, which was highlighted by a 57-55 regional victory over Quinsigamond CC on November 16th.

Leading the way for the Cougars has been Chevon Cote (Chicopee, MA / Chicopee HS), the team's lone second year player. Cote is second on the team in points with 57, in rebounds with 33 and in free throw shooting percentage at 62.5%. Adrian Bonilla (Chicopee, MA / Chicopee Comprehensive HS) has been stellar offensively, leading Holyoke in points with 58 and in assists with 15. Jacob Santos (Holyoke, MA / Holyoke HS) is third on the team in points with 44 and in rebounds with 31. He has been very impressive with his free throws, shooting a team-best 76.2% from the line. Hasip Ahmeti (West Springfield, MA / West Springfield HS) has dominated the boards, leading the Cougars with 38 rebounds.

Men's basketball has a regional record of 1-3 and an overall record of 1-4. They will pause for winter break before restarting their season with a home game at 3pm on January 8th against Bunker Hill CC. Let's go Cougars!