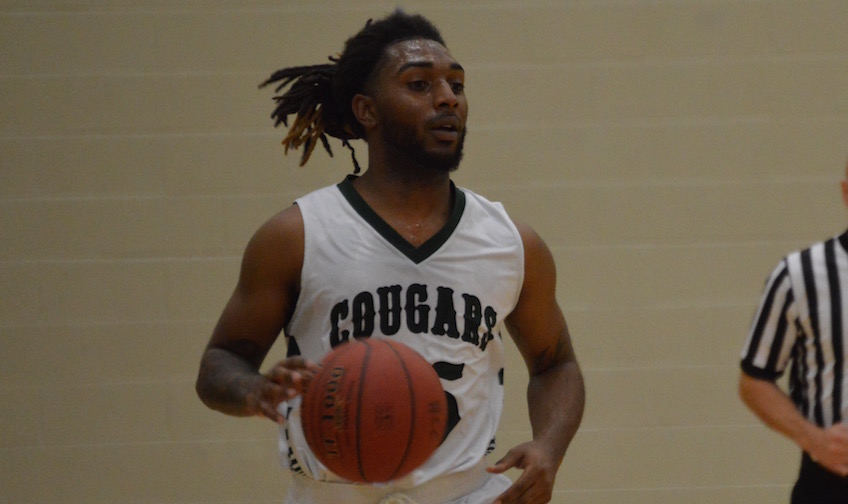 (Holyoke, MA) - The HCC men's basketball team earned their first victory of the young season this past Tuesday, defeating regional opponent UCONN Avery Point by a 79-71 final score. The Cougars put forth their best performance of the year, playing stifling defense while dominating on the boards. Holyoke out-rebounded their opposition by two-to-one, grabbing 48 total rebounds in the contest. The Cougars drained seven three-pointers in the win and shot close to 60% on both field goals and free throws.

Freshman forward DeVante Wardell (Holyoke, MA / Holyoke HS) led the way for Holyoke, posting a triple-double in the contest. Wardell was remarkable, scoring 23 points and 10 assists to go along with 17 rebounds. He shot 9 for 12 from the floor and sank 5 of 8 attempted free throws. Sophomore forward Darren Fair (Holyoke, MA / Holyoke HS) was outstanding for the Cougars, scoring a collegiate career high of 22 points. Fair was 9 of 15 from the floor and added a pair of three-pointers and a pair of free throws in the win. Additionally, Fair snagged 10 rebounds, giving him a double-double on the day. Freshman guard Zachary Renvil (Chicopee, MA / Hampden Charter School) had a strong game, shooting 3 of 5 from three-point range. Renvil totaled 13 points and had 7 rebounds.

The Cougars look to carry their home-win momentum through the first half of the season after a slow start. They will play two more home games next week before moving into December, during which just one of their four games will be played at home. Let's go Cougars!