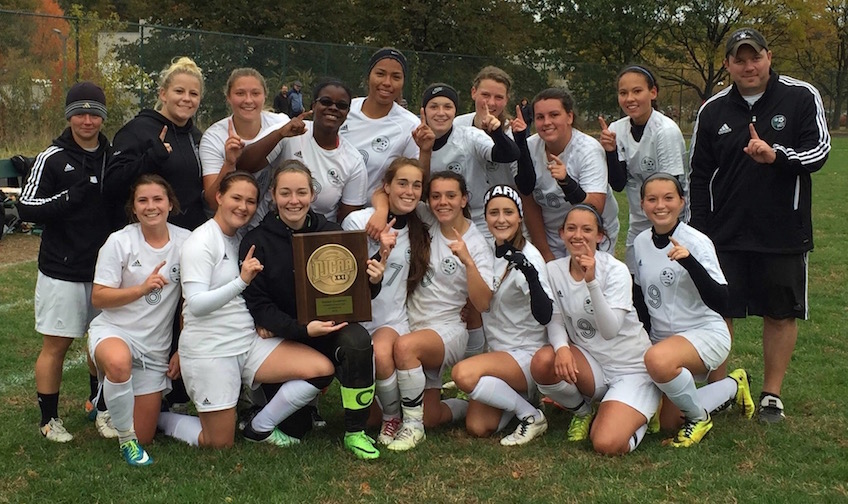 10/24/15 (Holyoke, MA)
Lady Cougars' soccer wins the New England Championship by way of a 3-0 victory over Massasoit CC. Holyoke CC women's soccer finished the season 12-4-4 overall and 8-0-1 regionally while being ranked as high as #7 in the NJCAA national rankings during the course of the season. The regional championship was the fourth consecutive one for HCC women's soccer as well as their eighth in the past 10 years.
Click here for full story - Click here for 2015 women's soccer roster

2/9/16 (Roxbury Crossing, MA)
Cougar men's basketball player, Marquise Caudill, joins the elite 500 Point Club by scoring 500 plus points during the course of his basketball career at Holyoke CC. Caudill reached the milestone in just one season with the Cougars as he scored a total of 566 points in 2015-16. Caudill would later be named the HCC men's basketball team MVP while also being selected to the All-New England team.
Click here for 2015-16 men's basketball roster

3/26/16 (South Portland, ME)
Cougar Baseball's Mike Hagelstein opens the season with a two-hit, nine-strikeout complete game victory on the mound. The Cougars' ace pitcher would later be named MVP of the baseball team.
Click here for full story

10/31/16 (Somerville, MA)
Cougar Men's Soccer earns a spot in the New England Championship game by way of their victory in the regional semifinal. The Cougars defeated Bristol CC in a penalty kick shootout after 110 minutes of soccer couldn't produce a winner.
Click here for full story

4/30/16 (Holyoke, MA)
Matt Serra, who played for both the baseball and basketball teams at HCC, blasts three home runs during a doubleheader for the Cougars' baseball team. Serra would go on to lead the Cougars in homeruns, RBI's, and batting average.
Click here for full story