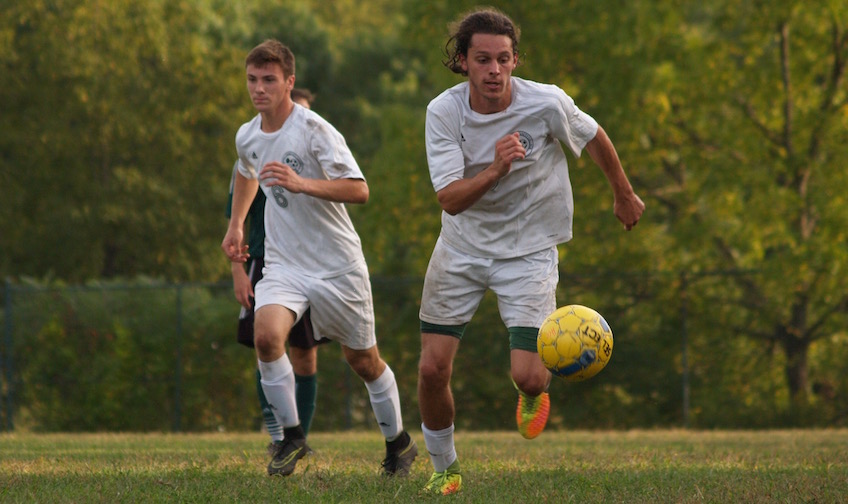 The Holyoke CC men's soccer team has worked very hard this season, finding a draw amidst a tough stretch of September games. Although the Cougars have yet to register a win, Coach Abel Durojaiye's boys continue to fight, battling relentlessly every game.

The Cougars earned a 3-3 tie recently while on the road, squaring off against regional opponent Mass Bay CC. Jacob Whitacre (Granby, MA / Granby HS) scored two goals in that contest and has been one of the Cougars' strongest players this season. Whitacre has shown a relentless work rate, running endlessly for his team every game. Luis Gomes (Ludlow, MA / Ludlow HS), a team captain and one of the Cougars' steadiest players, had a goal and an assist in the game. Gomes has shown stellar leadership throughout the year, bringing a calming influence to the team with his cool and confident play in the midfield.

Holyoke has received outstanding performances this season from Yasseen Malas (Amherst, MA / Amherst HS), who has been a force for the Cougars with his strong physical play. Nathan Ribeiro (Amherst, MA / Amherst HS) has also played remarkably, putting forth an endless effort every game and registering two goals on the year. Chris Thomas (East Longmeadow, MA / East Longmeadow HS) has been the Cougars' most dangerous scoring threat, creating countless scoring opportunities while burying Holyoke's most spectacular goal of the season.

The Cougars next game will be played at home against the New England region's top team as Bunker Hill CC visits on Saturday, October 8 for a 3 p.m. start. Holyoke played against Bunker Hill in 2015's New England Championship game, falling short to the eventual National Championship runner-up. Let's go Cougars!

Photos: (Main) Jacob Whitacre carries the ball as Nathan Ribeiro trails him looking to get open for a pass. (Thumbnail) Yasseen Malas dribbles the ball past an opposing defender.