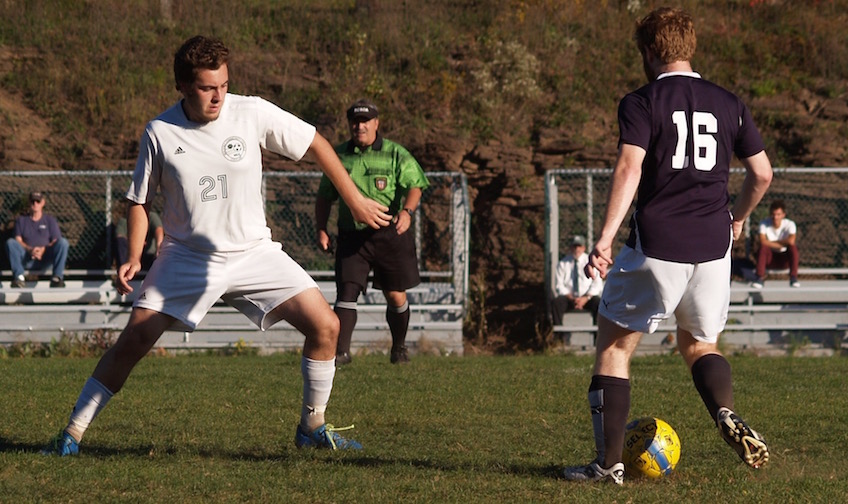 The Holyoke CC men's soccer team will play their first home game of the season on Thursday, September 8 at O'Connell Field at 4 p.m. The Cougars will play host to Roxbury CC, who will be Holyoke's first New England regional opponent. HCC started their season playing three non-regional games against some very tough competitors. Despite not having found the win column, the Cougars have certainly worked hard and prepared themselves well for their upcoming regional games.

Holyoke has received strong performances this season from two key sophomore team captains in Luis Gomes (Ludlow, MA / Ludlow HS) and Yahia Chaoui (Morocco, Africa). Gomes plays in the center of midfield and looks to be the playmaker who makes things happen offensively through his skillful distribution and clever decision making. Chaoui plays as a central defender and anchors the back line while using his years of soccer experience to defend wisely. As captains, Gomes and Chaoui have both shown tremendous leadership all season for HCC. Another player who has performed brilliantly is freshman Francisco 'Javi' Cruz (Amherst, MA / Amherst-Pelham Regional HS). Cruz is a goalkeeper and, along with his ability to make great saves, can also play out of goal as a skilled field player. He has also shown great leadership qualities and was named as a co-captain by his coaches.

After making it all the way to last year's New England championship game, the Cougars hope to again be a strong contender within the region this year. Holyoke will look to earn their first victory of the season in the upcoming regional match-up.