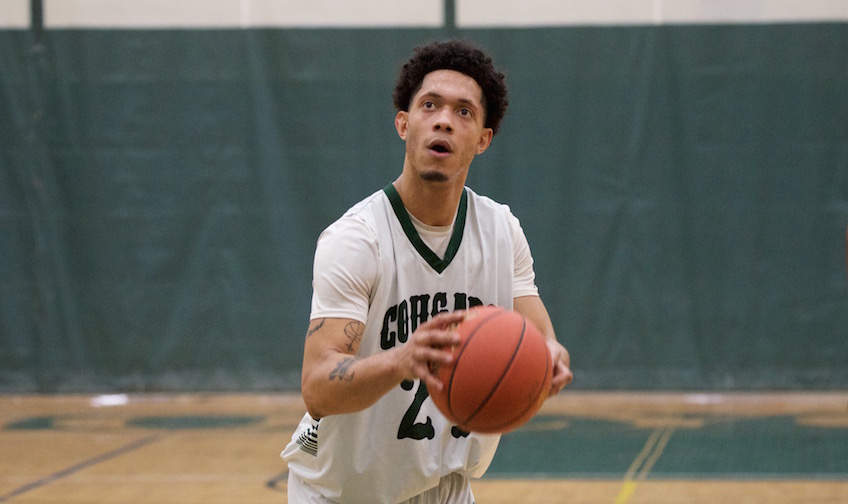 The Holyoke CC men's basketball team has put forth a strong effort in the early part of their season, competing hard against several very tough opponents. Under the guidance of 14th year head coach Chris Montemayor, the Cougars have performed well and fought hard thus far this year. Holyoke has shown some promise and the group is optimistic that a good result is on the horizon.

The Cougars have a young team this year, returning just one player from last season in sophomore guard Jovan Rivera (Shrewsbury, MA / Amherst Regional HS), who has played very well. Several freshmen have shined on the court with guard Michael Castillo (Northampton, MA / Northampton HS) leading the way. Castillo is Holyoke's leader in points scored and points per game this season, averaging 20 per contest. Castillo leads the team in three-point shooting percentage and is third on the team in rebounds per game. Forward Timothy Krason (Westfield, MA / Hampshire Regional HS) has been outstanding; he leads the Cougars in rebounding, averaging 11.5 boards per game. Krason is second on the team in points per game, averaging 13.5 and he leads the team in blocks. Forward Chevron Owens-Cote (Chicopee, MA / Chicopee HS) has played impressive basketball and is second on the team in both points and rebounds per game.

The Cougars will look to put one in the win column before the semester break with just a few games remaining until the halt in play. Holyoke will host local rival Springfield Technical CC on Thursday, December 13th at 7pm at the Bartley Center in their final home game of 2018. Let's go Cougars!