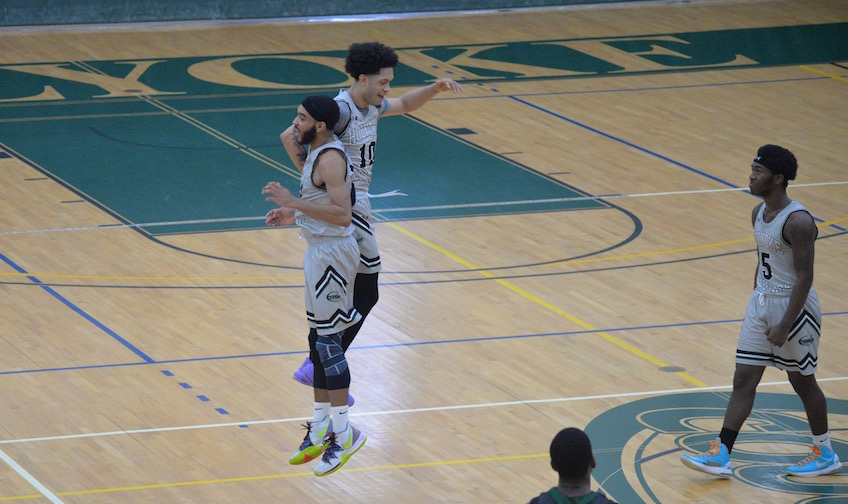 (Holyoke, MA) - Men's basketball defeated New England's first place team, CC of Rhode Island, on Saturday afternoon 91-85. Trailing by five at halftime, the Cougars outscored their opposition 53-42 in the second half to earn the comeback victory. The win is Holyoke's third in a row overall and regionally and they have won five of their last six regional games. The Cougars sank a season-high 12 three-pointers for the second consecutive game and fourth time this season.

Michael Castillo (Northampton, MA / Northampton HS) and Moashaun Alvarado (Springfield, MA / Sci-Tech HS) took charge of the offense, each registering a double-double and playing tremendously throughout the contest. Castillo scored a game-high 28 points, including an impressive six three-pointers. He was 8 for 9 from the free-throw line and grabbed 11 rebounds. Alvarado scored 26 points in the win while dominating the boards with 22 rebounds. For the second straight game, Alvarado brought fans out of their seats with a late game highlight-reel dunk, Saturday's being a two-handed powerful jam to drive the proverbial nail in their opponent's coffin.

The Cougars improve to 9-6 in regional play and 9-9 overall. The win gives them a great chance of qualifying for the New England Championship Tournament with five regional games still left to play this season. Holyoke hosts just one more game this year, a regional matchup against Quincy College, on Thursday, February 13th at 6pm. Let's go Cougars!