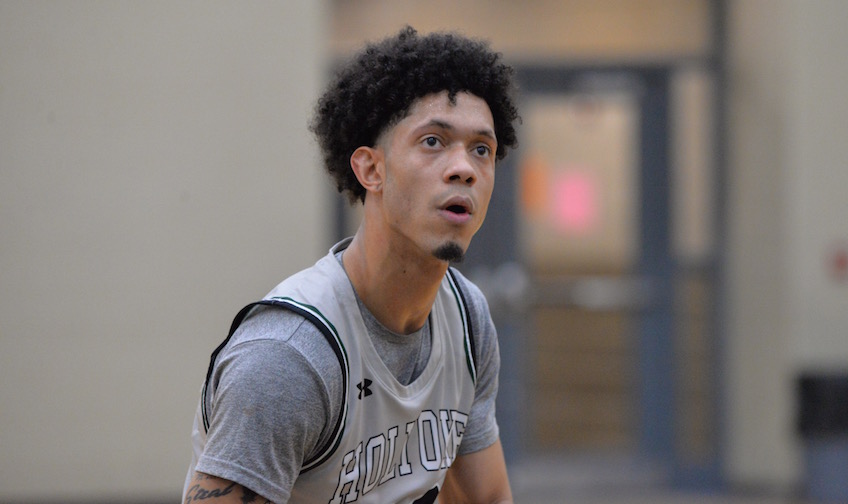 Sophomore forward Michael Castillo (Northampton, MA / Northampton HS) has attained a remarkable achievement, having scored his 1000th career point. He reached 1000 in Thursday's game, becoming just the third HCC men's basketball player in history to accomplish the feat. Castillo became a member of the Cougar's 500-Point Club when he scored 532 points as a freshman, and so far this season he has racked up 469 points. Castillo scored 24 points in Thursday's win which included shooting 5 for 5 from the free-throw line. Jequan Rogers (Springfield, MA / Sabis HS) had a major accomplishment of his own in the win over STCC, registering an elusive triple-double. Rogers led the Cougars in scoring on the night, tallying 26 points while grabbing 10 rebounds and dishing out 10 assists. Moashaun Alvarado (Springfield, MA / Sci-Tech HS) was dominant in both of this week's games for Holyoke, recording a double-double in each contest. Alvarado had 29 points and 18 rebounds on Tuesday and 22 points with 12 boards on Thursday.

The Cougars end the regular season with a regional record of 12-8 and an overall record of 12-11. Their dozen wins are the most by a Cougar men's basketball team in over a decade. Early next week, Holyoke will learn who their regional championship first-round opponent will be. They could play a post-season game as early as Wednesday, February 26th with the New England championship game taking place on Sunday, March 1st. Let's go Cougars!

Photos: (Main) Castillo showing great focus as he prepares to take a foul shot. (Thumbnail) Rogers (#5) and Alvarado (#15) take a moment to pose for a photo.