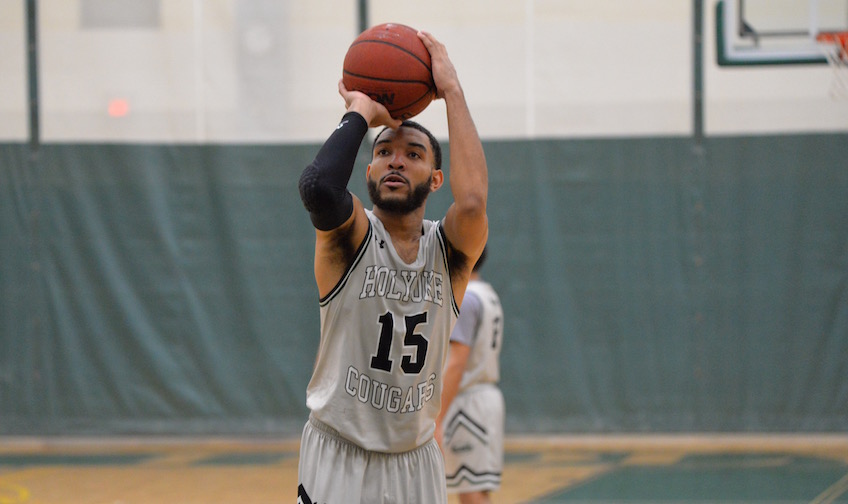 (Holyoke, MA) - Men's basketball won their second consecutive regional home game on Thursday night, defeating Bristol CC 89-55. The Cougars' 34-point margin of victory is the largest of the season, breaking the 22-point mark they set in their previous game. Holyoke has won four of their last five regional games and six of their past eight. The Cougars matched their season high for three-pointers made in a game, tallying a dozen, which they've done three times this year.

Moashaun Alvarado (Springfield, MA / Sci-Tech HS) was a dominant force throughout the contest, scoring 25 points while grabbing 14 rebounds to register a double-double. Alvarado threw down a pair of slam dunks during the win, including a jaw-dropping highlight reel dunk in the game's final minutes. Deven Rivera (Holyoke,MA / Holyoke HS) played his best offensive game of the season, scoring 16 points, which included four three-pointers. Both are season-high totals for Rivera, who has played particularly well for the Cougars during this second half of the campaign. Michael Castillo (Northampton, MA / Northampton HS), who has registered a double-double in all but one of Holyoke's games this season, tallied 19 points to go along with 13 rebounds.

The Cougars are 6-8 in regional play and firmly hold onto a New England Championship Tournament playoff spot. They have an overall record of 8-9. Holyoke hosts the region's first place team, CC of Rhode Island, on Saturday, February 8th at 3pm. Let's go Cougars!