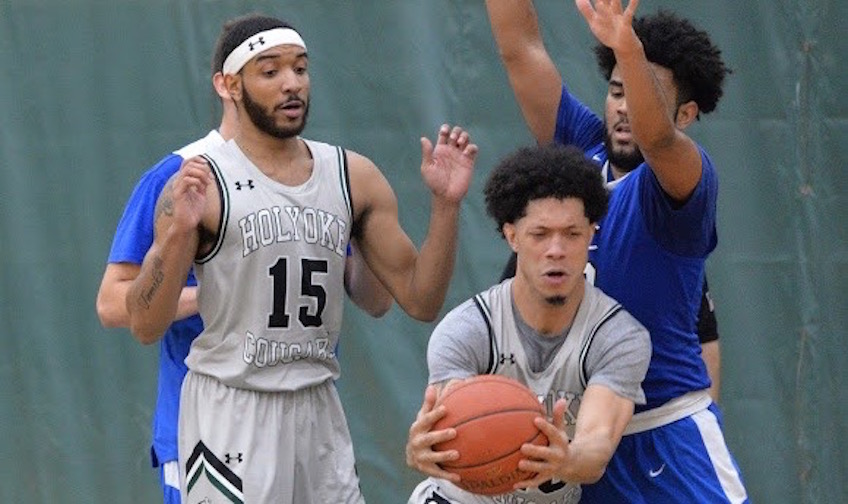 Michael Castillo (Northampton, MA / Northampton HS) - Sophomore - Guard - #10
2019-20 - 1st Team All-New England, Cougars Player Award
2018-19 - Cougars Most Valuable Player
Castillo had an outstanding season and career at HCC, becoming just the third Cougar in the history of the men's basketball program to reach the 1,000 point mark. Castillo scored 1,019 points during his two years, making him third all-time on the men's basketball scoring list. He joined the Cougars' 500 Club during his freshman season when he tallied 532 points while earning team MVP honors. This past season, as a sophomore, Castillo registered 487 points and earned the team Player Award. He led the Cougars in three-pointers scored during both of his years and is second all-time at HCC in three-pointers made, sinking 107 in his career. Castillo registered a double-double in 20 of his 24 games played this season and scored a monstrous 43 points during a February home game.

Moashaun Alvarado (Springfield, MA / Sci-Tech HS) - Freshman - Forward - #15
2019-20 - 1st Team All-New England, Cougars Most Valuable Player
Alvarado led the Cougars this season in points scored, rebounds, blocks, field goals made, points per game and rebounds per game. He joined the Cougars 500 Club, tallying his team-high 508 points while bringing down 323 rebounds. Alvarado's 13.5 rebounds per game were fifth in the nation in NJCAA Division III and he was 13th in total rebounds. He produced several highlight reel plays with his spectacular slam-dunks. Alvarado registered a double-double in 21 of his 24 games played this season and was named Cougars team MVP.