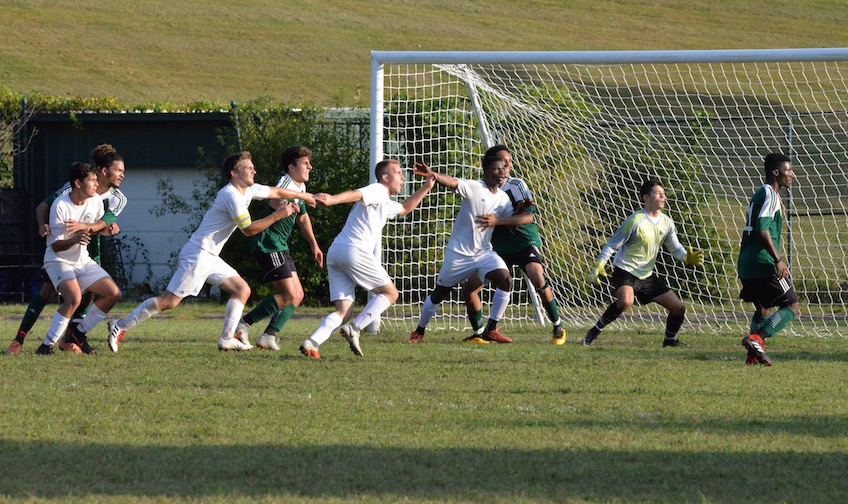 (Springfield, MA) - The Cougars soccer team earned their second shutout of the season, defeating local rival Springfield Technical CC 2-0 on Wednesday afternoon. The win keeps the Cougars in a playoff position in the New England standings with three games left to play.

Holyoke received goals from a pair of freshman standouts as Adam Herbert (West Springfield, MA / West Springfield HS) and Joseph Evborokhai (Holyoke, MA / Holyoke HS) each found the back of the net. Herbert currently leads the Cougars in goals and Evborokhai is the team's leader in assists and points. Goalkeeper Gabe Ramos (Chicopee, MA / Ludlow HS), who has been brilliant in his new position in goal, registered his first and the team's second shutout of the season. Jordan Rubek (Easthampton, MA / Hampshire Regional HS) played remarkably throughout the game and assisted on a goal with a beautiful cross into the box. Defender Garrett Antosz (Westhampton, MA / Amherst Regional HS) played an exceptional game on way to the shutout win.

The Cougars are 3-3-1 regionally and 3-7-1 overall. They currently occupy third place in the New England regional standings and have a very promising chance of qualifying for the New England Championship Tournament. Holyoke has three games remaining in the regular season, including a pair of regional home games on the next two Wednesdays. The Cougars will host Mass Bay CC on October 17th at 4pm and then host STCC on October 24th at 4pm to close out the regular season. Let's go Cougars!