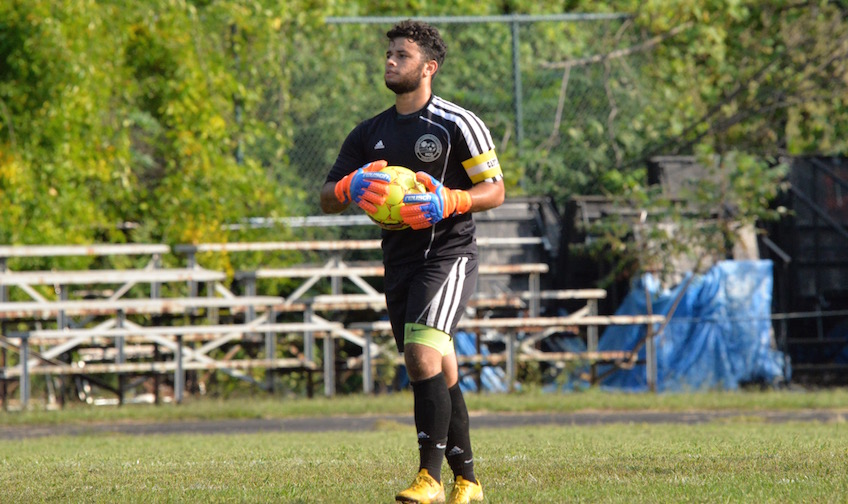 (Holyoke, MA) - The Cougars men's soccer team squared off against the New England region's perennial powerhouse Bunker Hill CC on Tuesday afternoon, earning a hard fought 1-1 tie. Holyoke played a remarkable game on a damp and rainy day where slippery conditions were a factor in both of the goals scored. Prior to Tuesday's contest, the Cougars hadn't defeated or tied the Bulldogs of Bunker Hill since 2014 when Holyoke won 3-2 in Boston.

Center back and team co-captain Dan McColgan (Chesterfield, MA / Hamshire Regional HS) scored the Cougars' lone goal in the first half with a free kick from nearly midfield. The shot came from a good distance out and took a favorable skip for Holyoke that the opposing goalkeeper could not handle. The goal was the first of the season for McColgan, who has been one of Holyoke's strongest defenders and players throughout the year. Co-captain Gabe Ramos (Chicopee, MA / Ludlow HS), who started the season as a center midfielder, has been playing as the Cougars' goalkeeper over the last few weeks and has been absolutely brilliant. Although his play in the midfield is missed, Ramos's performance in the goal has proven to be critical in Holyoke's ability to keep high-powered opposing offenses from scoring an abundance of goals. In Tuesday's tie, Ramos made several game changing saves, including a penalty kick stop in the first half. He was most certainly HCC's best player in the draw, keeping the Cougars in the game time and time again. The extremely wet conditions in the second half played a big role in the only goal Ramos conceded. A saturated field and consequent safety concerns forced the referees to end the game at the end of regulation and forego the overtime period. Holyoke received outstanding performances from midfielders Adam Herbert (West Springfield, MA / West Springfield HS) and Logan Bridgman (Southampton, MA / Hampshire Regional HS).

The Cougars are 2-6-1 overall and 2-3-1 in the region. They are currently in playoff position with most of their remaining games to be played against regional opponents. Holyoke's next three games will be played on the road with their next home contest coming on Wednesday, October 17 at 4pm against Mass Bay CC. Let's go Cougars!