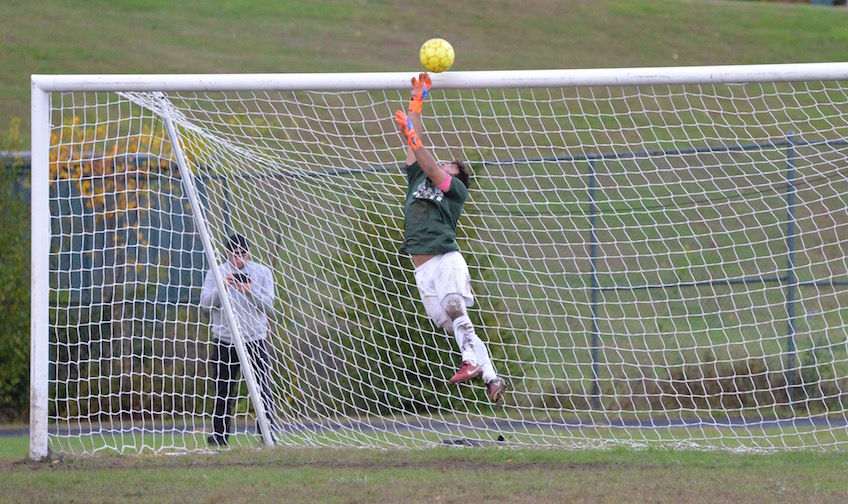 (Holyoke, MA) - The HCC men's soccer team earned a colossal 1-0 victory over the New England region's first place team, Mass Bay CC, on Wednesday afternoon. Mass Bay is currently ranked #9 in the NJCAA's national poll and was undefeated prior to their loss to the Cougars. The shutout win clinches a post-season birth for Holyoke, who will finish in third place in the regional standings at season's end.

The Cougars received another stellar performance from their goalkeeper, Gabe Ramos (Chicopee, MA / Ludlow HS), who made several game changing saves on way to his and the team's third straight shutout. In keeping the clean sheet, Ramos was called upon to make two spectacular saves in the second half. Freshman forward Joseph Evborokhai (Holyoke, MA / Holyoke HS), who leads the Cougars in points this season, scored the lone goal. Evborokhai's tally came in the first half when he beat the opposing goalkeeper to the ball and slotted it in the back of the net. Center back Dan McColgan (Chesterfield, MA / Hampshire Regional HS) was once again a force defensively, helping to keep a very potent Mass Bay offense from creating too many goal-scoring opportunities. Midfielder Jordan Rubeck (Easthampton, MA / Hampshire Regional HS) made a great defensive play late in the game that prevented a glorious scoring chance for the opposition.

The Cougars are 5-3-1 regionally and 5-7-1 overall. They have one regular season game remaining that cannot change where they will finish in the regional standings. Holyoke will be third place in the New England standings and likely square off against Bunker Hill CC or Mass Bay CC in the first round of the regional tournament. Let's go Cougars!

Photos: (Main) Gabe Ramos makes a brilliant save in the second half of Wednesday's win. (Thumbnail) Evborokhai positions himself to defend with McColgan in support.