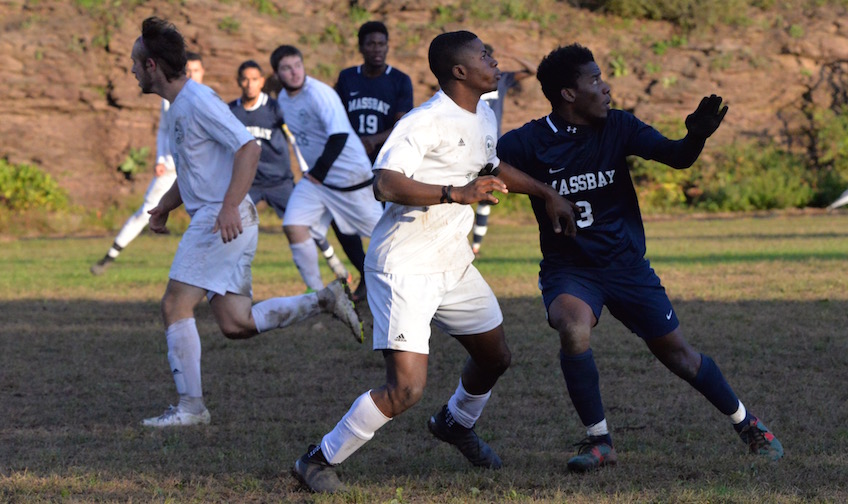 Six members of the 2018 Cougars Soccer team have been selected to the All-New England team. The men's soccer team had one of the program's most successful seasons over the past decade and this year marks just the second time in the storied program's history that six players earn All-Region honors.

Joseph Evborokhai (Holyoke, MA / Holyoke HS) - Freshman - Forward / Midfielder - #18
2018 - 1st Team All-New England, NJCAA Player of the Week (Week of Sept. 3-9)
Evborokhai was the Cougars' leader in assists and points this season. An extremely talented and speedy attacking player, Evborokhai was a constant threat on opposing defenses. He tied an HCC men's soccer all-time record for points in a game by registering 12 points in a single contest. In that same game, Evborokhai had six assists, setting an all-time HCC men's soccer record for assists in a game.

Adam Herbert (West Springfield, MA / West Springfield HS) - Freshman - Forward / Midfielder - #17
2018 - 1st Team All-New England
Herbert led the Cougars in goals this season and was second in points and assists. A very dynamic attacking player who plays the game with a lot of passion, Herbert was one of the most impressive players on this year's team. He scored a pair of very important game-winning goals this year and is a versatile player who can play in a defensive role if needed.

Gabriel Ramos (Chicopee, MA / Ludlow HS) - Sophomore - Goalkeeper / Midfielder - #11
2018 - 2nd Team All-New England, Cougars Soccer Most Valuable Player (MVP), Team Captain
Ramos started the year playing as a center midfield where he was very impressive. A few weeks into the season he was moved in to the goalkeeping position where he played through the season's end. Ramos was absolutely remarkable in goal, making several spectacular saves throughout the year and giving the Cougars a chance to win any game they played. Ramos registered three shutouts, including one over the #9 ranked team in the nation. He scored three goals this season, two while playing midfield and one while he was the goalkeeper taking a penalty kick for Holyoke.

Daniel McColgan (Chesterfield, MA / Hampshire Regional HS) - Sophomore - Center Back - #13
2018 - 2nd Team All-New England, Cougars Soccer Player Award, Team Captain
2017 - 2nd Team All-New England, Cougars Soccer Most Valuable Player (MVP), Team Captain
McColgan was the anchor of the Cougars defense and a dominant presence for the team over the past two seasons. McColgan is a smart defender who reads the game brilliantly. He is exceptional at winning the ball in the air and tackles extremely hard. McColgan led the team vocally and also by example with his relentless work rate.

Devon Huard (West Warren, MA / MacDuffie School) - Freshmen - Center Midfielder - #10
2018 - 2nd Team All-New England
Huard was one of the Cougars' most skilled players, controlling the center of the midfield for the team. A very poised player with the ball, his vision of the field and ability to distribute made him a very dangerous player throughout the year. Huard tallied three goals this season.

Shyam Tewani Mupompa (Amherst, MA / Amherst Regional HS) - Sophomore - Defender - #2
2018 - 2nd Team All-New England
2017 - 2nd Team All-New England
Mupompa was one of the Cougars' strongest defensive players as well as one of the team's most consistent players over the past two seasons. Mupompa made it very difficult for opposing attackers to earn scoring chances while constantly showing his unrelenting work rate. He was excellent distributing the ball forward to his attacking teammates.