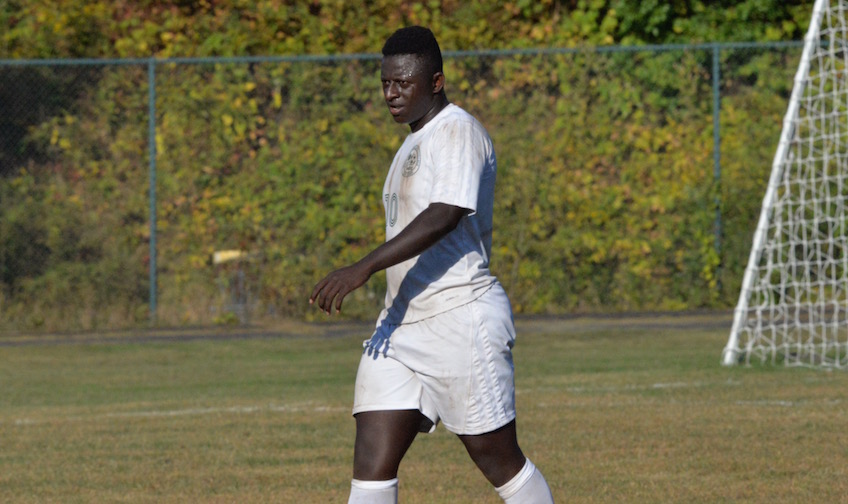 Three freshmen members of the Cougars men's soccer team have earned 2019 awards. Two players were named to the All-New England (All-Region) Team, one of whom, along with the third, earned Cougars Soccer team awards.

Musa Jiana (Chicopee, MA / Chicopee HS) - Freshman - Forward - #10
2019 - 1st Team All-New England, Cougars Most Valuable Player
Jiana was the Cougars' most dominant player this season, a strong physical presence who can create goals at a tremendous rate. Jiana possesses a cannon of a shot and led the team in goals, assists and points. He is an extremely hard worker who fights hard to get the ball and create scoring opportunities. The MVP for the Cougars, Jiana was one of the top scorers in the New England region.

Brandon Carmona (East Longmeadow, MA / Springfield Central HS) - Freshman - Defender - #3
2019- 2nd Team All-New England
Carmona was the Cougars' strongest defender, leading the way from his outside back position. A smart reader of the game who defends patiently and wisely, he chooses well when to defend with smarts and when to defend with physicality. Carmona posses spectacular speed and, along with tracking down his opposition, can create offense from his defensive position. He was second on the team in points, registering several assists when pushing forward into the attack.

Brice Foss (South Hadley, MA / Madawaska HS) - Freshman - Forward #13
2019 - Cougars Player Award
Foss was a forward this season and earned the honor of being selected for the Cougars Player Award. He is very positive young man who works extremely hard for his team and carries himself with class both on and off the field. Foss exemplifies what a Cougar soccer player should be and is a very fitting recipient of the honor.