Cougars Ready to Kick Off Campaign 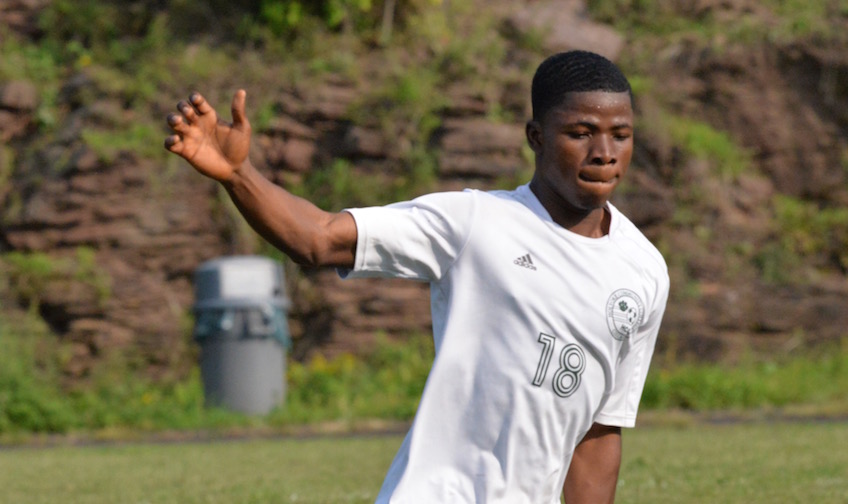 The HCC men's soccer team is ready to open the 2019 season, kicking things off with their first game this Saturday. The Cougars travel to play against Northern Essex CC at 1pm in regional competition. Holyoke's first three match-ups of the year will be played on the road, with the first home contest taking place on Saturday, Sept. 14th at 1pm versus Mass Bay CC.

The Cougars are led by three returning sophomores - Joseph Evborokhai (Holyoke, MA / Holyoke HS), Garrett Antosz (Westhampton, MA / Amherst Regional HS) and Francsco "Javi" Cruz (Amherst, MA / Amherst Regional HS). Evborokhai and Antosz played their freshman seasons last year and Cruz played his in 2016. Evborokhai had an outstanding first season for the Cougars in 2018, being named as a First Team All-New England selection at season's end. Evborokhai was also selected as the NJCAA Men's Soccer Player of the Week for Sept. 3-9, 2018. During that week, Evborokhai had an exceptional game where he scored a hat trick and registered an astonishing six assists. With these feats, he tied one record set in 1973 for HCC men's soccer points in a game and broke another all-time record for assists in a game. Cruz returns to play for the Cougars after taking two seasons off to help coach HCC soccer. He was an outstanding goalkeeper during his freshman season at Holyoke where he was named captain, a tremendous achievement for a first year player. Cruz returns to the pitch to play primarily as a field player and is a stellar option to also play in the goal if needed. Antosz brings a wealth of talent, experience and versatility to the team, being able to play as a defender or in the midfield. An outstanding athlete, Antosz was a member of the HCC baseball team this past spring.

The Cougars had one of their best seasons of the past decade in 2018 and look to carry some of last season's momentum into the start of this year. The Cougars were able to defeat the #9 NJCAA nationally ranked team last year during the regular season. They also put forth a strong showing in the New England Championship Tournament, falling to the eventual regional champions to end their season. This year's team will look to start the season off on the right foot this Saturday. Let's go Cougars!