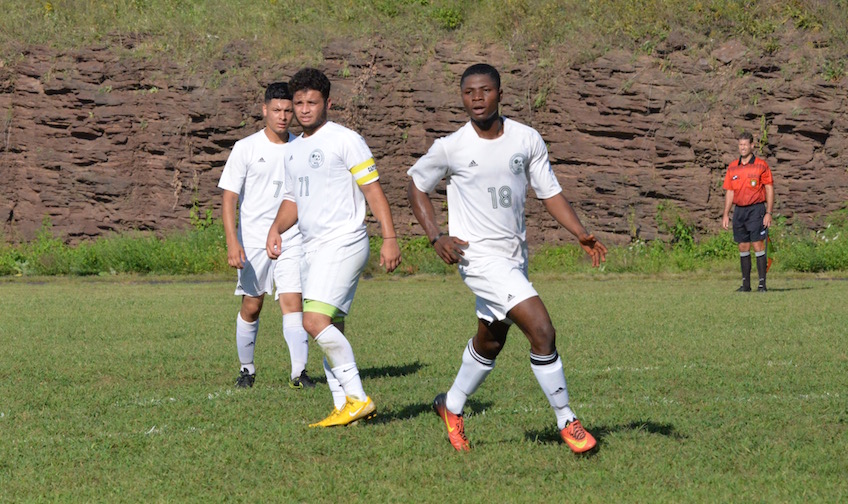 (Holyoke, MA) - The Cougars scored early and often during their home opener on Wednesday afternoon, leading to a lopsided victory over regional opponent Roxbury CC. Holyoke scored 11 goals in the matchup, which is the third highest total of goals scored in a single game in program history. The Cougars were sure to keep a clean sheet, earning a shutout in the victory.

Cougars freshman Joseph Evborokhai led the way offensively and put himself into the HCC soccer record books with his astounding scoring totals. Evborokhai had a hat trick and registered a remarkable six assists in the win. His 12 points in a single game ties the all-time record set way back in 1973 by Mike Lapan. Evborokhai and Lapan are the only players in men's soccer program history to tally a dozen points in a game with the next closest total being nine. Evborokhai's six assists now sit atop the all-time list for most assists in a game with the previous mark being four. Freshman Marcos Figueroa had a pair of goals and second year standouts Gabe Ramos and Jeremy Gongora each scored one. Sophomore Logan Bridgman scored his first collegiate goal and freshmen Devon Huard, Adam Hebert and Zane Wendolowski each found the back of the net once. Sophomore center back Dan McColgan led the defense in front of freshman goalkeepers Garrett Antosz and Shyam Khadka who shared the shutout.

The Cougars are 1-0-0 in the New England Region and 1-2-0 overall. Their next game is this Saturday at home against regional opponent Quincy College at 1pm. Let's go Cougars!

Photos: (Main) Joseph Evborokhai (#18) gets open for a scoring chance during Wednesday's game with Gabe Ramos (#11) and Jeremy Gongora (#7) in support. (Thumbnail) Dan McColgan gets in a good defensive position during the Cougars opener.