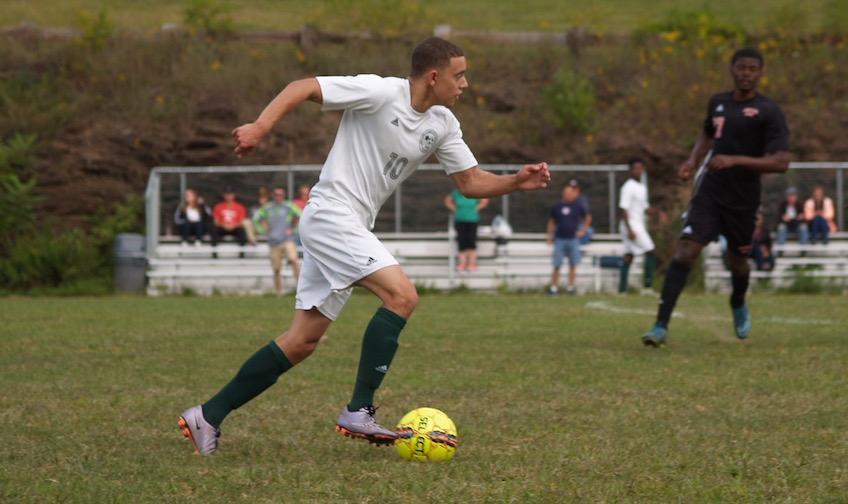 The HCC men's soccer team has put together a string of positive results with their season's end looming near. The Cougars have played well down the stretch, earning a victory to go along with a pair of one-goal losses within their last four games. Holyoke has scored eight goals during the strong run; in their final home game on Saturday, they scored twice in the final 15 minutes to force the matchup into overtime.

The Cougars have been led by the impressive play of defender Andre Shepard (Amherst, MA / Amherst Regional HS) during the latter half of the year. A sturdy physical presence, Shepard has performed brilliantly in the defensive end of the field while pushing forward into the attack to help the Cougars attain goals of their own. Shepard scored an outstanding free kick goal in the 87th minute of the game on Saturday to knot the score up at 3-3. Captain and fellow defender Daniel McColgan (Chesterfield, MA / Hampshire Regional HS) has been among Holyoke's strongest and most consistent performers all season. The team's leader was credited with the lone goal in the Cougars' win last week. Midfielder Josiah Wilson (Amherst, MA / Amherst Regional HS) has been exceptional for the Cougars, tallying two goals and two assists in the past four contests. Wilson leads the team in both goals and points this year. Defender Shyam Tewani (Amherst, MA / Amherst Regional HS) and midfielder Oscar Vidal Rubio (Palmer, MA / Chicopee Comprehensive HS) each scored his first goal of the season on Saturday.

The Cougars' victory improves their overall record, adding one in the win column. Holyoke will close out the campaign with one more away against Division I opponent CC of Rhode Island. Let's go Cougars!