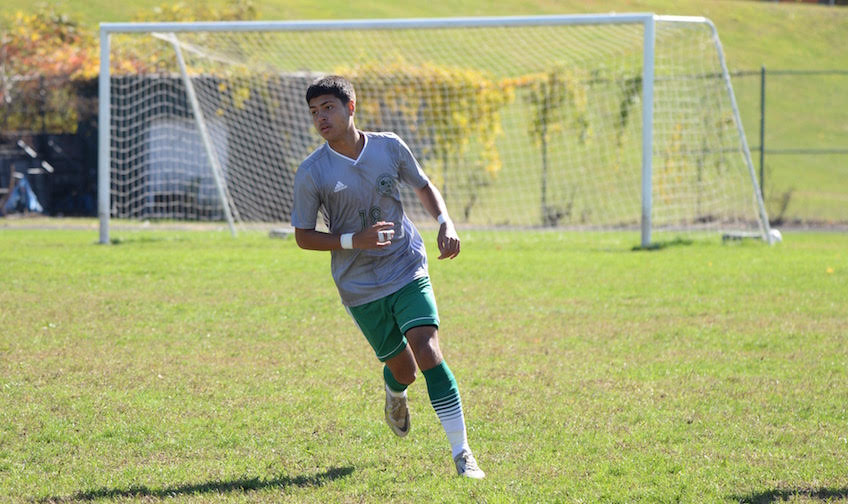 (Holyoke, MA) - Men's soccer won their regional semifinal game on Saturday afternoon and will play in the New England championship game on Sunday. The Cougars played brilliantly in the semi, knocking off the top seed Roxbury CC by a 3-1 score. Holyoke will travel to play CC of Rhode Island in the regional final, kicking off at 12:30pm at CCRI's Flanagan campus. The Cougars will be playing in their first New England final since 2015.

Holyoke came out strong in their semifinal, scoring twice in the first half. Rodrigo Profeta (Springfield, MA / St. Bonaventure's School) and Mike Grochowski (Westfield, MA / Westfield HS) each scored a goal that the other assisted. Profeta's was a stellar half volley and Grochowski's was a header off a corner kick. Niamke Akpayne (Chicopee, MA Chicopee Comprehensive HS) gave the Cougars a 3-0 lead in the second half with a perfectly placed shot into the upper corner of the goal, Prefeta supplying the assist. Goalkeeper Benjamin Giroux (East Longmeadow, MA / East Longmeadow HS) had another outstanding performance, conceding just one goal off of a penalty kick late in the contest.

Holyoke is 5-2-3 overall and 4-2-2 in the region. They have advanced through the quarterfinal and seminal round of the New England Championship Tournament to earn their chance to play for a New England Championship versus CCRI on Sunday afternoon. A victory would give the men's soccer program their first regional title since 2003. Let's go Cougars!

Photos: (Main) Profeta moving off the ball. (Thumbnail) Akpayne (#7) with the ball as Grochowski (#8) supports during a regular season home game.