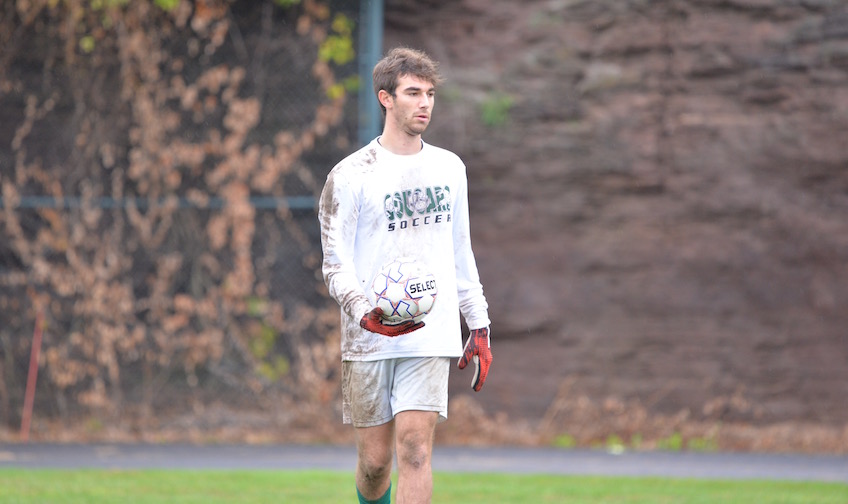 Three members of the New England championship runner-up Cougars soccer team have been chosen to the 2022 All-New England (All-Region) team. One athlete earned first team honors with two others earning a second team selection. A fourth individual was named as the HCC team Player Award recipient while the team's first team All-Region selection was chosen as Most Valuable Player (MVP).

Caden Hebert (Easthampton, MA / Easthampton HS) - Second Year - Defender - #11
2022 - 2nd Team All-New England, Team Captain
Hebert was the anchor of Holyoke's defense, making things extremely difficult for opposing attackers all season long. He is a tenacious tackler who reads the game very well and can serve the ball over great distance to spark the Cougars' attack. Hebert is one of the team's co-captains and leads by example both on and off the field.

Michael Grochowski (Westfield, MA / Westfield HS) - First Year - Center Midfielder - #8
2022 - 2nd Team All-New England
Grochowski was the Cougars' most dynamic and offensively talented players, a threat to score or create a scoring chance every time he touched the ball. He was the team's leader in goals and points scored from his center midfield position. Grochowski was one of the team's hardest workers on both the offensive and defensive side of the ball and is a player who reads the game tremendously well.

Braeden Vermette (Ludlow, MA / Ludlow HS) - Second Year - Center Midfielder - #6
2022 - Cougars Player Award, Team Captain
Vermette was one of Holyoke's center midfielders and one of their strongest and most consistent all-around players. He was one of the team's co-captains and its leader on and off the field both vocally and by example. Vermette was never outworked and carried himself with class, earning the team's Player Award.