Cougars Roaring Toward the Opening Whistle 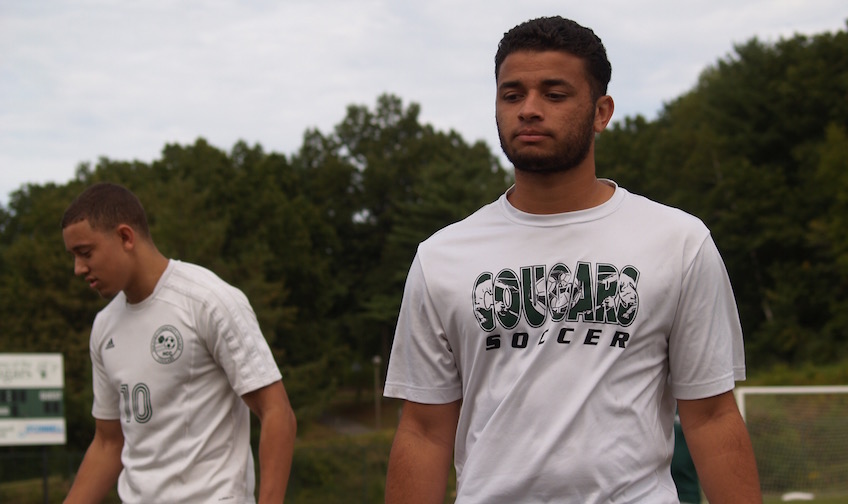 The 2018 Cougars Soccer team will kick off their season this weekend in Dryden, NY as Holyoke travels to play in the East Coast Cup Invitational hosted by Tompkins Cortland CC. The Cougars will play their opener against the host team, Tompkins Cortland, on Saturday at 8:00pm before squaring off against Finger Lakes CC at 12:30pm on Sunday.

The Cougars have a very optimistic outlook for this season as Holyoke returns six players from last year along with an additional sophomore who played a few years ago. The Cougars will be led by sophomore Gabe Ramos (Chicopee, MA / Ludlow HS) who played his freshman season for Holyoke in 2013. Ramos is a remarkably skilled center midfielder who is constantly creating great scoring chances. He is an outstanding leader who took a few years off from playing to coach and now brings a wealth of experience and leadership to his team. The Cougars return three players who were selected to the All-New England team in 2017 in sophomores Dan McColgan (Chesterfield, MA / Hampshire Regional HS), Josiah Wilson (Amherst, MA / Amherst Regional HS) and Shyam Tewani (Amherst, MA / Amherst Regional HS). McColgan was the anchor of the team's defense last season and will be a dominating physical presence once again this year. Wilson and Tewani showed tremendous skill throughout last season and plan to have a huge impact on the Cougars' success this season. Three other outstanding sophomores are part of this strong returning squad as Andre Shepard (Amherst, MA / Amherst Regional HS), Jordan Rubek (Easthampton, MA / Hampshire Regional HS) and Logan Bridgman (Southampton, MA / Hampshire Regional HS) are poised to have fantastic sophomore seasons.

The Cougars will rely on the experience and skill of their returning players along with the joining freshmen's energy and desire to bring them success. Coach Durojaiye is optimistic his team will do well this season and hopes to get the campaign started off strong this weekend. Let's go Cougars!

Photos: (Main) Gabe Ramos (R) and Andre Shepard (L) get ready to play in a preseason scrimmage. (Thumbnail) Josiah Wilson (#7) and Dan McColgan (#13) in front of goalkeeper Jordan Rubek during the 2017 season.