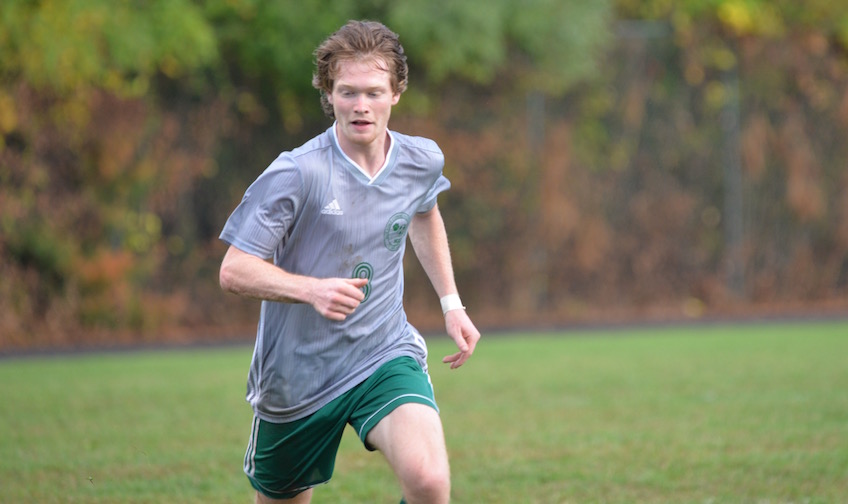 (Holyoke, MA) - Men's soccer remains perfect on the year, improving to 3-0 with their victory over local rival Springfield Technical CC on Tuesday afternoon. The Cougars won the game 2-1, playing at home for the first time this season. You would have to look back to 2010 to find the last time Holyoke opened a season with three straight wins.

The Cougars controlled play for most of the game but found themselves down 1-0 at halftime. For the second straight game, they scored a pair of second-half goals to earn a come-from-behind victory. Michael Grochowski (Westfield, MA / Westfield HS) scored the game-winning goal with ten minutes remaining in the contest. Grochowski took a powerful shot that squeezed through the STCC goalkeeper and into the net. Rodrigo Profeta (Springfield, MA / St. Bonaventure's School) tallied Holyoke's first goal, which knotted the score at one a piece, in the 68th minute. Braden Vermette (Ludlow, MA /Ludlow HS) played a dominant game for the Cougars, controlling the midfield.

Men's soccer has a regional record of 2-0-0 and an overall record of 3-0-0. They play their next game on the road, travelling to face regional opponent Roxbury CC on Tuesday, Sept 27th at 4pm. Let's go Cougars!

Photos: (Main) Grochowski in the midfield during Tuesday's win. (Thumbnail) Profeta awaits a teammate's cross into the box.