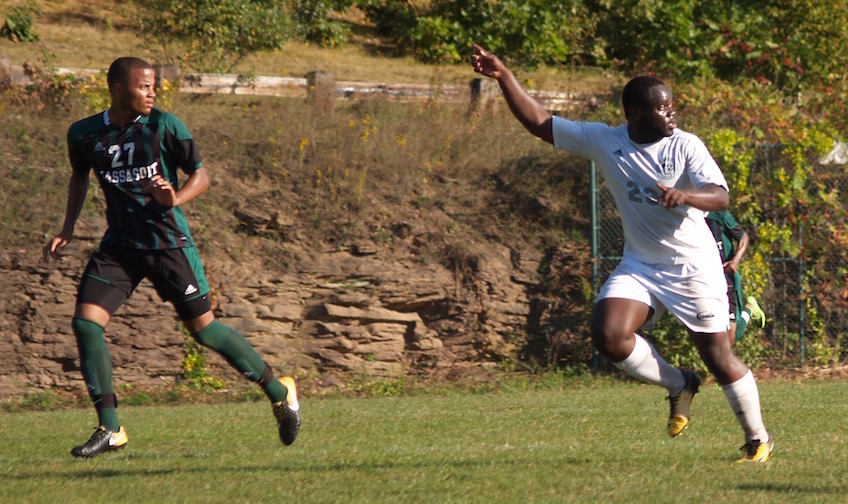 The HCC men's soccer team has continued to work hard through the first half of their season. Although the Cougars have yet to register a win, the team has demonstrated several positive and encouraging moments throughout the first few games of the year. Holyoke has scored four goals in their last three contests and held a 1-0 lead over Division 1 powerhouse Massasoit CC with 25 minutes left to play in their last game.

The Cougars' Francis Frimpong (Springfield, MA / Central HS) has two goals in the last three matches, including the lone tally against Massasoit. Frimpong is a powerful forward who consistently makes life difficult for opposing teams' defenders. Joshua Grywalski (Ludlow, MA / Ludlow HS), and Josiah Wilson (Amherst, MA / Amherst Regional HS), both of whom have played tremendously this season, scored Holyoke's other goals in their most recent matchups. Cougars' goalkeeper Jordan Rubeck (Easthampton, MA /Hampshire Regional HS) had his hands full in the latest contest, making 13 saves, several of which were of the spectacular variety.

Holyoke has gained confidence and momentum with their strong play in the last few outings and is getting ever closer to finding that first win. Up next for the Cougars is a regional road game at Bunker Hill CC on Thursday October 5th at 4pm. Holyoke has several regional games remaining where they will work to notch that first victory of the year. Let's go Cougars!

Photos: (Main) Francis Frimpong calls for the ball as he makes a forward run versus Massasoit. (Thumbnail) Goalkeeper Jordan Rubek punts the ball during the Cougars' most recent game as teammate Joshua Grywalski looks on.