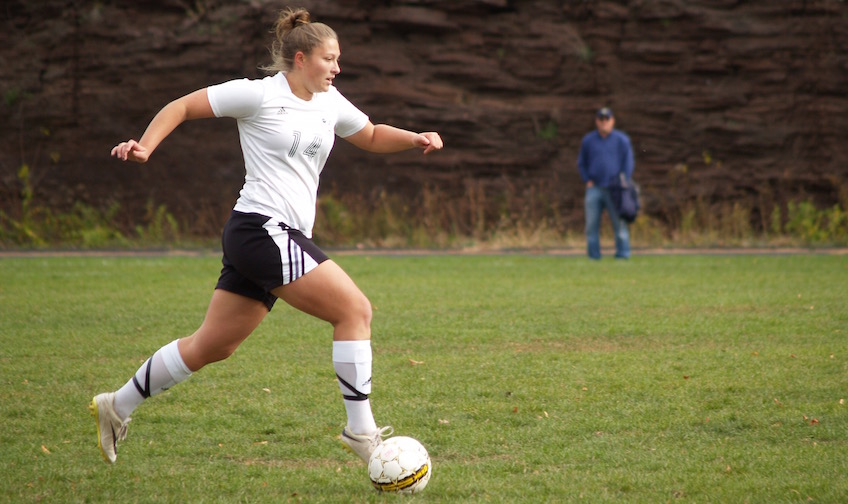 (Springfield, MA) - The Holyoke Community College women's soccer team, currently ranked #10 in the NJCAA national rankings, traveled to Springfield Technical CC on Wednesday afternoon to square off against their local rivals, the Rams. Holyoke encountered a well-planned defensive scheme and had to wait until the 87th minute of the game to find the back of the net. The Cougars out-shot the Rams 36-3 in the 1-0 win with 21 of their 36 shots being on goal. Holyoke's victory was their 12th in a row, setting an all-time record for consecutive wins for the women's soccer program.

Natalie Galindo (Chicopee, MA / Chicopee Comprehensive HS) scored the lone goal for the Cougars with a brilliant free kick that she blasted in from 30 yards out. Galindo, an NJCAA All-American last season, has been on a scoring rampage recently, tallying 11 goals in the last eight games. She leads the Cougars in goals and points, with 13 and 37 respectively. Allison Zollo (Monson, MA / Monson HS) earned the assist on the goal and once again played spectacularly for the Cougars. Catherine Hotham (Southampton, MA / Hampshire Regional HS) played very well for Holyoke, as did Alli Stuetzel (Feeding Hills, MA / Agawam HS). Late in the game, Stuetzel scored what should have been the Cougars' second goal before the referee mysteriously waved it off. MyKaela O'Connell (Brimfield, MA / Palmer HS) made two saves in the win, earning her ninth and the team's tenth shutout of the season.

The Lady Cougars' overall record is 13-4-0 and they are a perfect 9-0-0 in regional games. Their 12-game winning streak is an all-time best in HCC women's soccer program history. Holyoke's next opponent is Division I powerhouse ASA College of New York, whom the Cougars welcome in on Saturday October 15 for a 2 p.m. start. Let's go Cougars!

Photos: (Main) Natalie Galindo dribbles the ball up field during a game from earlier in the season. (Thumbnail) Allie Zollo takes a shot during pre-game warm up.