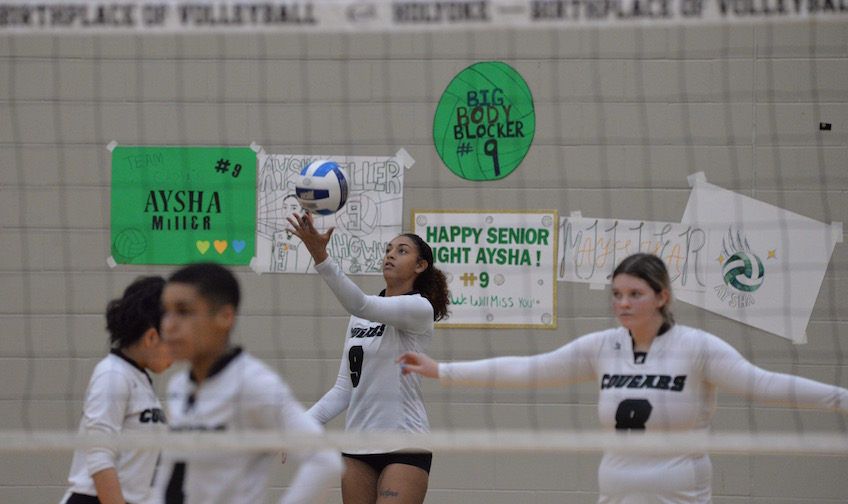 (Holyoke, MA) - The Lady Cougars volleyball team closed out their regular season with an impressive 3-0 victory over Mass Bay CC on Thursday night. Holyoke shined on their home court and their win firmly locks the Cougars into their spot in the New England (Region XXI) Championship Tournament.

The Lady Cougars celebrated a senior night for second-year player Aysha Miller (Chicopee, MA / Chicopee HS) who turned in a tremendous performance in her last match at the Bartley Center. Miller was a dominant presence at the net, smashing down several spikes and coming up with multiple blocks. Her serves were outstanding, fired over the net with furious pace. Mayouri Yath (Amherst, MA / Amherst Regional HS) played exceptionally well for the Cougars and has been one of the team's strongest players throughout the season.

Holyoke finishes the regular season with a 3-4 regional record and a 3-6 overall record. They qualify for the New England Championship Tournament as the #4 seed and will play the host and #1 seed Northern Essex CC in a semifinal at 11am on Saturday. The other semifinal matchup features #2 seed Massasoit CC and #3 seed CC of Rhode Island. The winners of the semifinal matchups will meet in the championship game to be played on the same day at 3pm. Let's go Cougars!