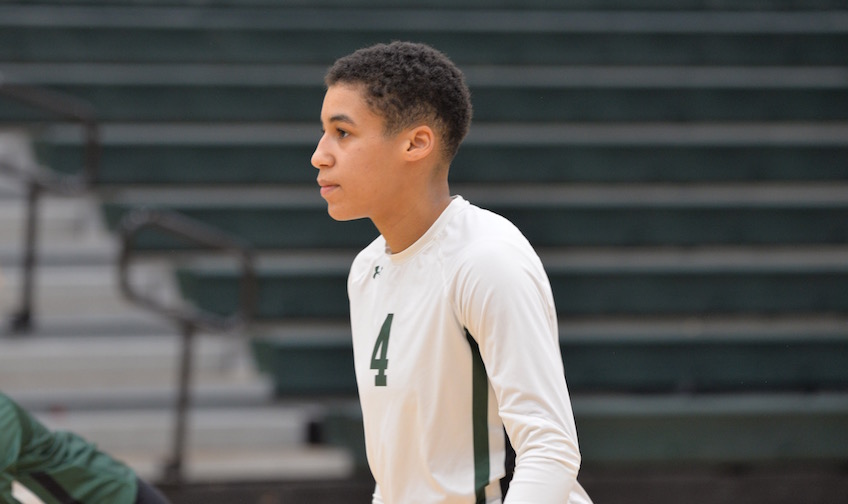 Coming off of one of the HCC volleyball program's most successful seasons in recent history, six members of the Lady Cougars' team have been selected to the 2022 All-New England (All-Region) team. Two players earned first team honors while four others were selected, two apiece, to the second and honorable mention teams. A seventh athlete was named as the HCC team's Player Award recipient and one of the six All-New England honorees was named as the HCC team's Most Valuable Player (MVP).

Adareasheia Pinsly (Alaska / Sunrise Mountain HS) - Second Year - Outside Hitter - #4
2022 - 1st Team All-New England, Lady Cougars Most Valuable Player
2021 - 2nd Team All-New England
Pinsley was an outside hitter and one of the Lady Cougars' strongest and most consistent players. She is a fiercely competitive athlete and an extremely skilled player who shined all season, earning the team's MVP honor. A returner from 2021, Pinsley is a two-time All-Region selection. She was second on the team in digs with 132, just one back from the team lead, and third in kills and points.

Mayouri Yath (Cambodia / Amherst Regional HS) - Second Year - Outside Hitter - #7
2022 - 1st Team All-New England
Yath was an outside hitter and Holyoke's most dominant player this season. She can hit the ball with tremendous pace and accuracy from all over the court. She covers a lot of ground with her quick feet and has exceptional leaping ability. Yath led the Lady Cougars in digs with 133, kills with 118, and points with 146. She was tied for second on the team in aces, registering 27 with her spectacular jump serve.

Kayla Nguyen (Springfield, MA / Sci-Tech HS) - First Year - Setter - #1
2022 - 2nd Team All-New England
Nguyen was the Lady Cougars' setter, displaying a remarkable touch on the ball throughout the season. She led Holyoke in assists, tallying 334, which accounted for over 90% of the team's assists. HCC's coaching staff has said Nguyen has "God's hands" when referring to her phenomenal touch on the ball. She was third on the team in digs, just two off of the team lead.

Sehkinah Del Valle (Manati, Puerto Rico / Putnam Vocational HS) - First Year - Pin Hitter - #10
2022 - 2nd Team All-New England
De Valle was a pin hitter and one of Holyoke's strongest servers and most consistent players. She led the team in aces this season, registering 31. De Valle plays a smart game and works extremely hard for her team. She was fourth on the Lady Cougars in digs and points and tied for fourth in kills.

Shauna Charles (Springfield, MA / Springfield International Charter) - First Year - Middle Blocker - #12
2022 - Honorable Mention Team All-New England
Charles was a middle blocker and a force at the net throughout the season for HCC. A tall and strong athlete who posses a stellar vertical leap, Charles made earning kills very difficult on her opposition while earning many for her herself and her team. Charles was second on the Cougars in solo blocks with 17 and second in kills with 66.

Marlina Devine (Easthampton, MA / Easthampton HS) - First Year - Middle Blocker - #11
Devine was a middle blocker and the Lady Cougars' strongest all-around blocker this season. A dominant net player with a long reach, she led the team in solo blocks with 20 and was tied for fourth in kills. Devine reads the game exceptionally well and uses her smarts and athleticism to seemingly always be in the right place at the right time.

Aleyhsa Cruz Merced (Puerto Rico / Bay Path Vocational HS) - First Year - Opposite Hitter - #13
Cruz Merced was an opposite hitter and Holyoke's Player Award recipient this season. A hard working athlete and an exceptional teammate, she represented Lady Cougars' volleyball with class this year both on and off the court.