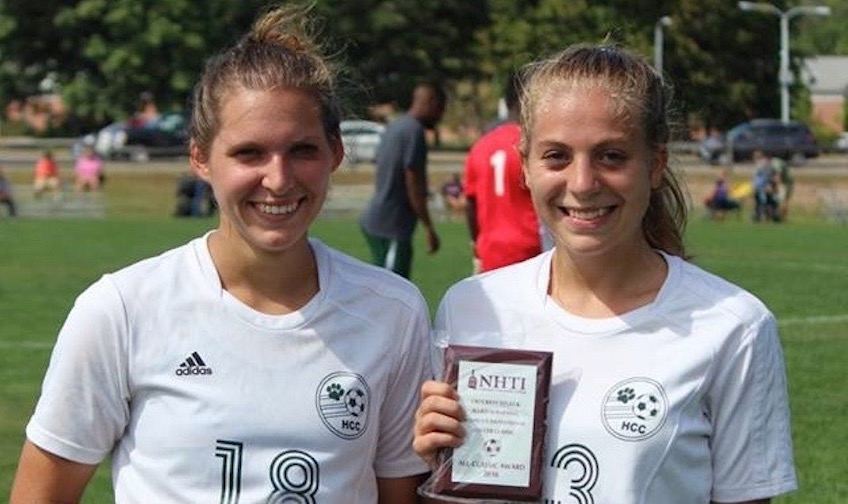 (Concord, NH) - The Lady Cougars, who are currently ranked #10 in the NJCAA's national rankings, spent the weekend playing two games against non-NJCAA teams at New Hampshire Technical Institution's Soccer Classic. Holyoke squared off against two very good teams in Albany College of Pharmacy and host NHTI at the invitational tournament.

The Lady Cougars were victorious on Sunday against the hosts after falling short to Albany on Saturday. HCC played very well over the course of the weekend, but two critical mistakes on Saturday cost the Cougars dearly leading to the 2-1 loss. Sunday's match up against NHTI brought a better result, as the Cougars found some of their remarkable offensive ability on their way to a 3-2 win.

The Cougars attained goals from four different players over the course of their two games. Holyoke's lone goal in Saturday's match up came from Jennifer Galindo (Chicopee, MA / Chicopee Comprehensive HS), who finished off a perfectly played corner kick crossed in by her sister Natalie Galindo (Chicopee, MA / Chicopee Comprehensive HS). The goal was the first of the season in which one of the Galindo sisters would assists the other's goal. Starting forwards Reilly Jodoin (South Hadley, MA / South Hadley HS) and Olivia Neiswanger (Holyoke, MA / Cathedral HS) each found the back of the net in the first half of Sunday's victory while Natalie Galindo scored the eventual game winner on a brilliant free kick in the second half. Tallying assists on Sunday's three goals were Catherine Hotham (Southampton, MA / Hampshire Regional HS), Jennifer Galindo, and McKenzie Wilson (South Hadley, MA / Smith Academy).

Two members of the Lady Cougars team were chosen to an All-Tournament team, which was comprised of some of the four participating team's strongest performers from the weekend. Jennifer Galindo and McKenzie Wilson were the players earning the honor for Holyoke as both played tremendously during the Cougars' two games.

The Lady Cougars have two very important home games at O'Connell Field at HCC this week as the team will play their first pair of New England regional matches of the season. Holyoke will host local rivals STCC on Wednesday at 4 p.m. before welcoming in Massasoit CC on Saturday for a 1 p.m. kickoff. Holyoke and Massasoit have faced off in the last three New England Championship games with the Cougars emerging victorious in all three years. Let's go Cougars!