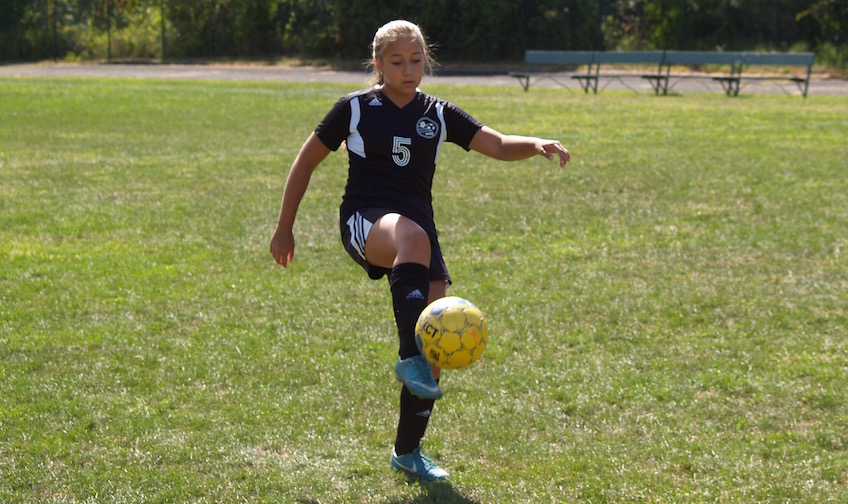 The Lady Cougars soccer team opened their season with two games in Dryden, NY this past weekend at the East Coast Cup Soccer Invitational hosted by Tompkins Cortland CC. Holyoke kicked off the season with a 1-0 overtime victory over the hosts on Saturday night before falling 3-1 to the three-time defending national champions, Brookdale CC on Sunday afternoon.

In the opener, the Cougars received a stellar performance from their entire team as they matched up against a formidable opponent in the tournament hosts, Tompkins Cortland. After 90 minutes of scoreless soccer, overtime was needed to determine a winner. It didn't take very long into the extra frame to settle things, as in just the second minute Cougars' freshman Alexis Rios (Springfield, MA / Central HS) found the back of the net, leading her team to a 1-0 victory. Rios buried her shot beautifully after receiving a brilliant header pass from sophomore Jennifer Galindo (South Hadley, MA / Chicopee Comprehensive HS) that sent Rios through toward the net. Galindo and fellow center midfielder, freshman McKenzie Wilson (South Hadley, MA / Smith Academy), were among the Cougars' strongest players in the game and over the course of the two-game weekend. In the victory, the entire Cougars' defense was strong, helping freshman goalkeeper MyKaela O'Connell (Brimfield, MA / Palmer HS) earn the shutout in her first colligate game. O'Connell made five saves in the contest. Sophomore defender Rebekah Herring (Springfield, MA / Palmer HS) led freshman defenders Allison Zollo (Monson, MA / Monson HS) and Catherine Hotham (Southampton, MA / Hampshire Regional HS) in front of O'Connell. Sophomores Alexandria Stuetzel (Feeding Hills, MA / Agawam HS) and Reilly Jodoin (South Hadley, MA / South Hadley HS) both had tremendous performances for the Cougars in the season's first game, as did freshman Emma Gomes (Ludlow, MA / Ludlow HS). Returning All-American Natalie Galindo (Chicopee, MA / Chicopee Comprehensive HS) was her usual physical presence in the midfield.

In game two, the Lady Cougars came out strong and played well against the NJCAA division III women's soccer three-time defending national champions, Brookdale CC. The Cougars jumped out to a 1-0 lead early in the game when Stuetzel scored on a rebound off the post that came from Olivia Neiswanger's (Holyoke, MA / Cathedral HS) shot. Holyoke would carry that 1-0 lead into halftime before running out of steam and conceding three goals in the second half falling to the champs by a 3-1 final.

The Lady Cougars will move forward from the weekend confident that they can compete with and be successful against some of the NJCAA's strongest teams. Led by several talented and hard working returning players and new freshman, the outlook for the season seems to be a very promising one. Up next for Holyoke is a meeting with Nassau CC in Garden City, NY on Saturday, September 3 at 2 p.m. Let's go Cougars!

Photos: (Main) Lexi Rios volleys the ball during the team warm up . (Thumbnail) Allie Stuetzel crosses the ball toward the goal.