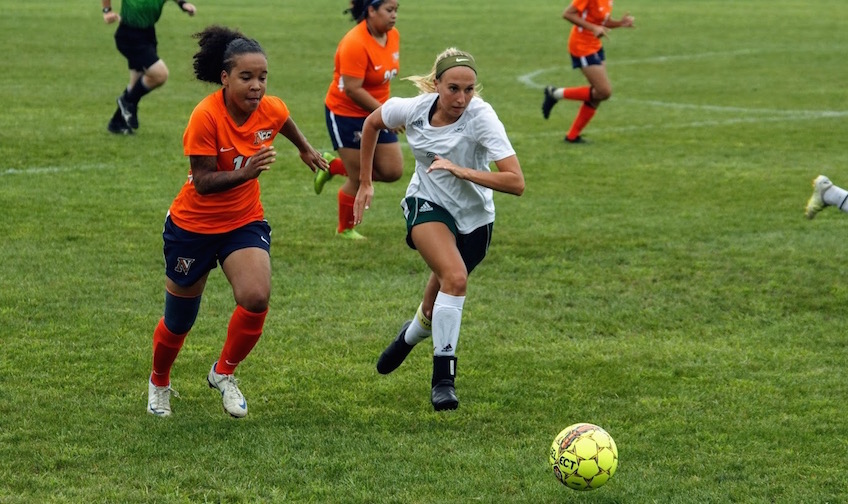 (Holyoke, MA) - The Lady Cougars kept a clean sheet for the third straight game, earning a hard-fought 1-0 victory over local rival Springfield Technical CC on Wednesday afternoon. The Cougars controlled possession and had the majority of the scoring chances as their rivals battled to keep the game very close on the score sheet. The win keeps Holyoke tied atop the New England regional standings in the final week of the regular season.

Jessica Patruno (Granby, MA /Granby HS) led the way for the Lady Cougars, scoring the contest's lone goal while anchoring a defense that limited the opposition's scoring chances throughout the game. Patruno buried a free kick from 35 yards out that sailed brilliantly into the top corner of the net over the opposing goalkeeper's outstretched hands. Sam Tersavich (Westfield, MA / Hampshire Regional HS), who leads the Cougars in goals, assists and points this season, registered the assist on the goal. Cougars' goalkeeper Steph Robert (Monson, MA / Monson HS) started her second straight game in goal and made four saves to earn her second consecutive and the team's third consecutive shutout. Madison Zollo (Monson, MA / Monson HS) played tremendously all game and was one of the best players on the field for either team.

The Lady Cougars have an overall record of 9-5-1 and a regional record of 8-1-0. They will close out their regular season with a pair of games this weekend. Saturday the Cougars travel to play New Hampshire Technical Institute at 1pm before hosting regional opponent Bunker Hill CC on Sunday at 2pm in the annual "Pink Out" game to support breast cancer awareness. Let's go Cougars!